The victims, Ankit Malhotra and Ranjan Kalra, both aged 35, worked at an event management company in Delhi and were on their way to the airport when the accident took place. 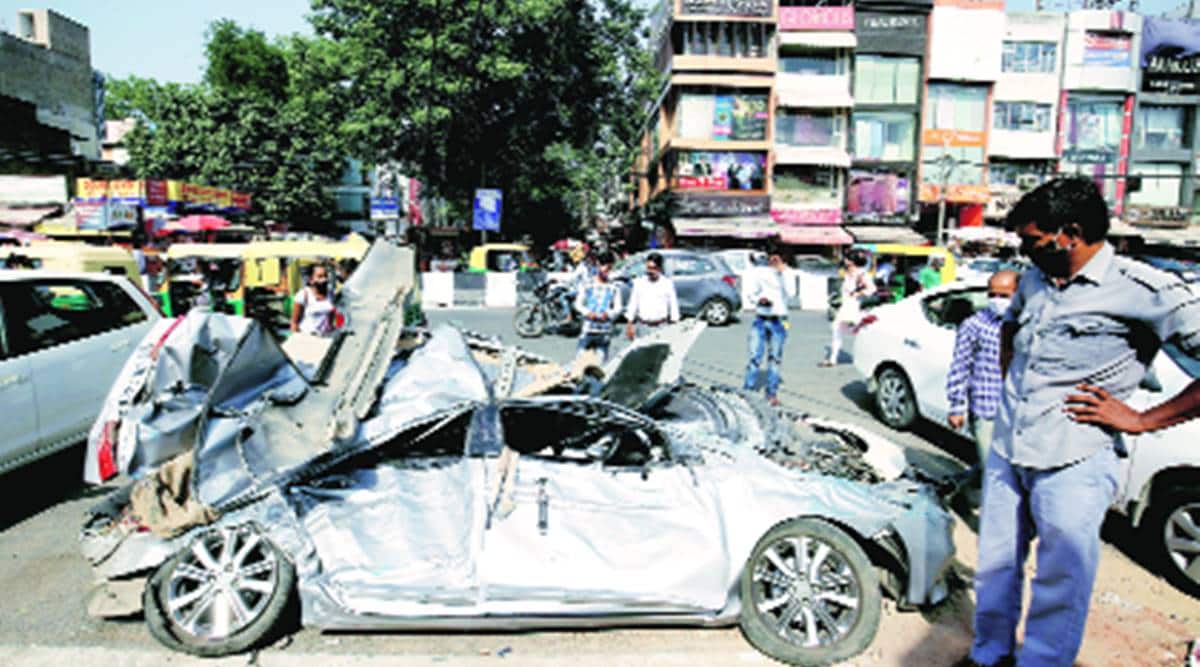 A container atop a truck toppled and fell on a car driving alongside it, crushing the Honda City and killing the two men inside, in Lajpat Nagar early Wednesday morning. It took officials over an hour to remove the heavy container from the car. Both men were dead by the time they were taken out. The driver of the truck has been arrested.

The victims, Ankit Malhotra and Ranjan Kalra, both aged 35, worked at an event management company in Delhi and were on their way to the airport when the accident took place. Malhotra lived in Karkardooma and had come to pick up Kalra from his residence in Lajpat Nagar. The two were going to catch a flight to Kolkata for work. The family of the deceased said the two have been working as partners for more than five years and would travel to different cities and plan weddings and other events.

The accident took place under the Lajpat Nagar flyover around 3:45 am. Police said the truck driver was taking a turn when the container tipped and landed on the car’s roof. The truck overturned as well. Police said the driver immediately got out of the vehicle and fled, police said.

R P Meena, DCP (Southeast) said, “We got a call regarding the accident around 3:50 am. When we reached the spot, we found that the car was badly crushed.”

Traffic police officers were called to the spot and it took two large Hydra cranes, a JCB and two small cranes to remove the container, which was filled with rice bags. The rice had scattered all over the road, and officials had to clear traffic to clear the stretch. The Delhi Fire Services were also called to the spot to help police.

It took an hour for the men to be pulled out. “When we found the car, it was crushed. We pulled out the two men who were found unconscious and severely injured. We took them to a nearby hospital, where they were declared dead,” said an officer.

A case has been registered under IPC sections 279 (rash driving) and 304 A (causing death by negligence) at Lajpat Nagar police station. Police said the truck driver, Vipin Yadav (25), was carrying basmati rice from Punjab and was to unload the container in Tughlaqabad. Police called the owner of the truck and got the details of the accused driver, who was later arrested. Police also conducted a medical examination to check if he was under the influence of alcohol, but the tests came negative

Relatives said Malhotra and Kalra were planning to stay for a week or two in Kolkata to oversee arrangements for a show they were organising next month.

Kalra was married and lived with his wife and two-year-old daughter at Krishna Market in Lajpat Nagar. Malhotra lived with his mother in Saini Enclave in Karkardooma and also has an apartment in Vasant Kunj.