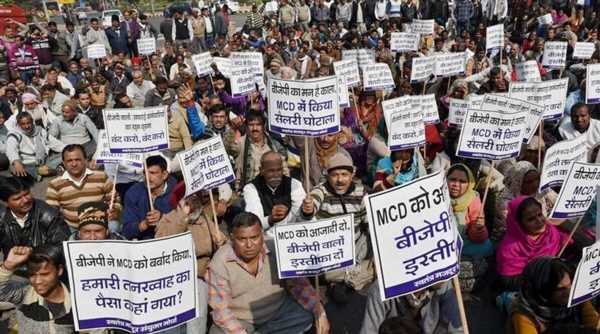 The elections for the three MCDs, which the BJP rule, is slated to take place in the next six months. An umbrella body of Delhi municipal corporation workers have written to Prime Minister Narendra Modi seeking a merger of the three civic bodies of the national capital — North, East and South.

The Confederation of MCD Employees Union, in their letter, said they had never faced the problem of a delay in salaries and pension delay between 1957 and 2012, but issues started arising after the division.

The Municipal Corporation of Delhi (MCD) had been divided into three parts by the Sheila Dikshit government in April 2012. In the last two years, there have been at least twelve strikes and protests by unions of doctors, nurses, teachers, and sanitation staff over a delay in payment of salaries by North MCD.

The union stated that the trifurcation has led to resources being unevenly balanced and money is being wasted by unnecessarily maintaining three offices. “Except South, the financial condition of the North and East is very severe. Most of the area falling in the South is having high circle rates, due to which, revenue generation by different municipal taxes in the area is also higher,” the letter read.

The confederation stated that since the division, the financial burden rose by at least three times as the civic body has to cater to three administrative structures of commissioners and other higher officials, three mayors and deputy mayors, chairperson standing committees and their deputies as well as zonal special committees. “This increase from the old 20 MCD committees comes up to three times — 75 committees. Before trifurcation, only one mayor, one commissioner and one chairman/ standing committee were there to control the functioning of the unified MCD. These expenditures incurred on their offices and other works is an additional financial burden to the existing corporations,” the letter added.

The elections for the three MCDs, which the BJP rule, is slated to take place in the next six months.