The cases by Forest department and other investigating agencies have revealed that it is smuggled to foreign countries via sea routes from various Indian ports and also by road via Nepal and other places across the border. 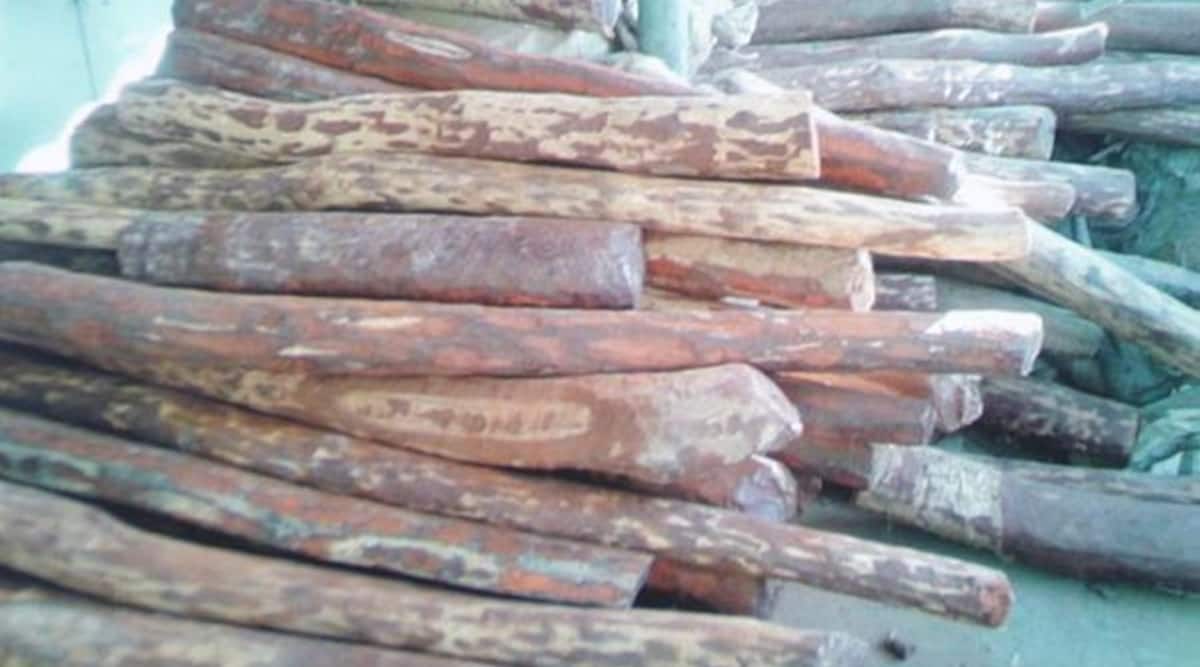 IN what is suspected to be a breakthrough into an international racket, Pimpri-Chinchwad Police have seized over six tonne of red sandalwood or Red Sanders worth over Rs 6 crore, suspected to have been illegally trafficked from forests in southern states of the country and headed for a port, to be smuggled abroad via sea route.

In the investigation into the suspected international ring, police have till now arrested five persons, including three from Mumbai and one from Karnataka, and have launched a manhunt for four more suspects believed to be higher-up in the chain and having links with operatives in the Middle East.

Officials said the precious wood was believed to have been illegally brought from forests on the Karnataka-Tamil Nadu border, and it was being taken to a port in Maharashtra from where it was to be smuggled abroad.

Red Sandalwood, also known as Red Sanders or Rakt Chandan, is a prohibited item for export and is covered under the Convention on International Trade in Endangered Species of Wild Fauna and Flora (CITES) list.

The cases by Forest department and other investigating agencies have revealed that it is smuggled to foreign countries via sea routes from various Indian ports and also by road via Nepal and other places across the border.

The wood is in high demand in the international illegal market for its uses ranging from luxury items to oriental medicine. Police cases in the past have revealed that Pune district is not a point of passage on the route from forests to ports, but has become a stoppage point because of the availability of large storage spaces in industrial hubs.

The latest case by Pimpri-Chinchwad Police began when a patrolling team from Wakad police station intercepted a car four days ago, based on some preliminary inputs. While police managed to detain three persons, two more passengers in the car managed to escape.

The three persons identified as Vilas Dherange (35) of Ahmadnagar, MA Saleem (43) of Shimoga and Karnataka and Vinod Fernandes (46) of Navi Mumbai were subsequently questioned. On Dherange’s phone, police found photos of a truckload of red sanders logs.

This leads took police to a truck parked near a hotel in Tathawade, and the search of the truck revealed 207 logs of red sanders, which were five to six feet long, together weighing around 6.4 tonne and valued at over Rs 6 crore in international markets.

The three persons detained earlier were subsequently placed under arrest. Police later arrested Zakirhussain Shaikh (50) of Turbhe in Mumbai and Mintobhai Gill (36) of Kalamboli in Navi Mumbai. All the five arrested accused have been remanded to police custody.

Pimpri-Chinchwad Police Commissioner Krishna Prakash said, “Our probe has revealed that the suspects used forged papers and a fake number plate for the truck in order to traffic the stolen wood. Multiple teams are probing various aspects of this case.”

Deputy Commissioner of Police Anand Bhoite said, “Some of the key aspects we are probing is the consignment’s place of origin, its destination and the international links.”

A senior officer who is part of the probe said, “Other than the five arrested persons, we have identified four more persons who are higher up in this ring and have links to operatives in the Middle East. The consignment was meant to go to a port near Mumbai and abroad from there.”