The award, organised by the Social Welfare and Women Empowerment Department, has been introduced for the first time by the government of Tamil Nadu to recognise transgenders and their contributions to the society. 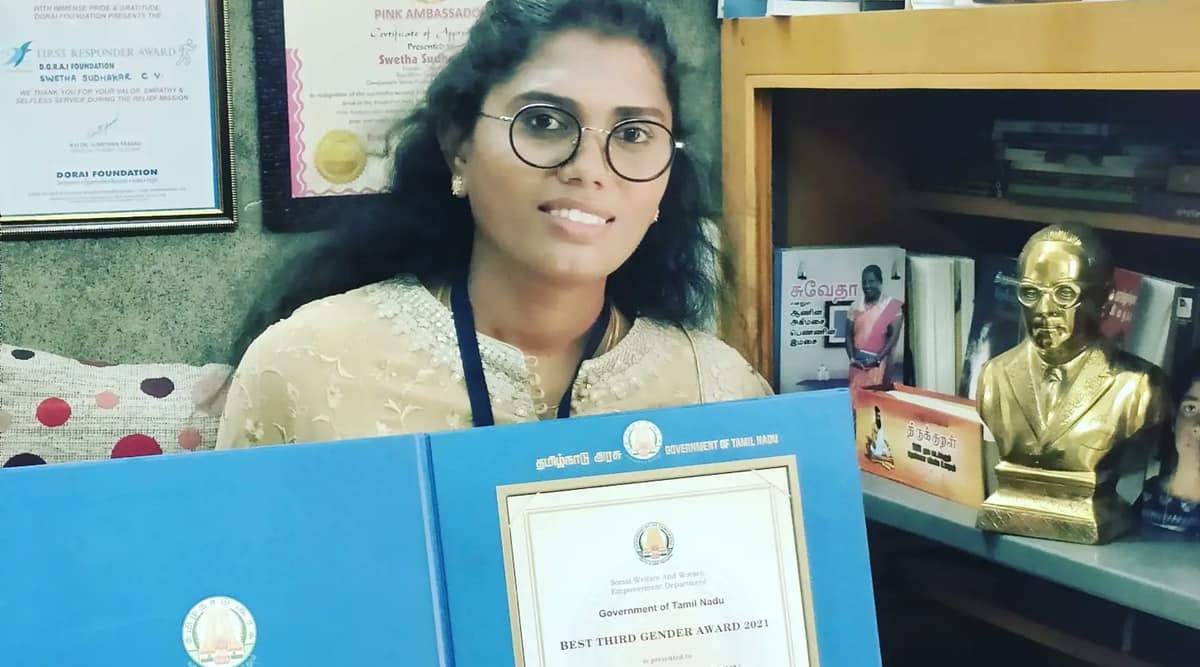 30-year-old transgender activist Grace Banu has been conferred the first ever ‘Best Third Gender’ award by the Tamil Nadu government for her services rendered towards the welfare of the society. She was honoured at the Independence Day event held in Chennai. The award, organised by the Social Welfare and Women Empowerment Department, has been introduced for the first time by the government of Tamil Nadu to recognise transgenders and their contributions to the society.

Hailing from Thoothukudi, Banu had to leave her family due to her gender awareness as a woman and quit job as an IT professional due to undesirable experiences. However, her hardships and hardwork turned Banu to a role model to many of the transgender achievers including Prithika Yashini, India’s first sub-inspector of police. She has bagged several awards in the state for ensuring education and employment rights to transgenders.

She also played a significant role in passing of the court order that gives an opportunity for transgenders in the TNPSC recruitment examination.

Through her efforts, members of transgender community were able to get seats in Siddha Medical College, nursing colleges, etc. She has been significant voice in fighting for trans rights as well as other issues affecting the civilians.

Speaking to indianexpress.com, Banu opened up on the various struggles she faced in her life.

Speaking on the award, Banu said, “I was extremely happy when I came to know I was chosen for the honour. Transgenders were provided awards in others states, but Tamil Nadu, as it has been a pioneer in many initiatives, has become the first state to introduce an award dedicated to transpersons. It’s a huge support. This is like government providing solidarity. I have experienced this before. As soon as I got admission in engineering college, Kalaignar ayya [late DMK President M Kalaignar Karunanidhi] wrote a letter in Murasoli [DMK’s official organ] congratulating me. Appreciating an achievement is the quality of a good leader. I saw that with Kalaignar ayya and now, his son and our Chief Minister MK Stalin, by introducing an award for our community achievers has shown that he is there to provide the support,” she said.

Banu said her community had been fighting for over 75 years for recognition, to create a space in the society. “Many activists like me have worked hard for our community; many have lost their lives in their struggle. People like Mohana amma, the president of the South Indian Transgender Federation, have made so much sacrifice for us, she had faced so much discrimination in early years. I thank all my community members and extend my wishes to the upcoming generation,” she said.

In 2014, Banu said, there was a rule that transpersons cannot study professional courses. “I wanted to challenge that and applied for the course”.

Before getting admission into engineering college, she had completed Diploma in Computer Science engineering and secured a job in IT sector where she faced several unpleasant experiences.

“I faced a lot of discrimination when I was working. My colleagues never treated me on par with them. After three months into the job, I spoke to the management about gender identity. At first, they said I cannot continue there. Later they permitted me to work but with certain conditions. I was asked to move out from the residential space they had earlier provided to me. I was paid less and made to work for more hours than my colleagues. Meanwhile, I took a loan and underwent surgery. I was in so much pain but was made to come to the office as I was not provided any maternity leave given for the female employees. I pondered over my situation… Why am I being tortured and discriminated like this? At that moment I decided to bring change so that no one from my community would face something like this in the future,” she said.

Banu later quit her job and got admission at the Sri Krishna College in Arakkonam. “The travel from Chennai to the college was a nightmare, every single day. After I joined engineering, the UGC and Anna University passed orders providing scholarship to transpersons”.

She added that all her experiences pushed her to take steps legally.

“Five of us joined together and started a protest to provide reservation for transgender people. That protest made everyone notice us. We challenged why we were not allowed to write competitive exams like TNPSC and got favourable judgment. Similar things happened in other instances as well. We opened each and every door that was blocking our path. We encouraged our community members who want to write government examination. We told them that we were here for them. We want to create a secure environment for transpersons,” Banu added.

Commenting on the controversy surrounding the award, Banu said, “the previous AIADMK government changed the name transgender to third gender in all official documents. We had condemned it. It’s been only 100 days since this government has assumed office, even to them we have placed our request”.

Banu said that she had expressed her disappointment to the authorities as soon as she saw the award title ‘Best Third Gender’.

“They said they will make necessary changes this year and issue a government order. Initially, they had mentioned Selvi Grace Banu in the certificate. I asked them if they can alter it to Thirunangai Grace Banu and they changed it the day before the event. So I am confident that the government will also change the award to ‘Best Transgender’ instead of ‘Best Third Gender’ soon,” she added.

When asked what else she expects from the government for her community, Banu said she would be at peace only on the day the government provides their long-standing demand of a horizontal reservation in employment and education. “The day we get our reservation rights, that will be the actual liberation day for us,” Banu said.