On Wednesday, the Ahmedabad police issued an advisory stating the ongoing night curfew, between 9 pm and 6 am, will continue in the city on December 31 and prohibited restaurants, hotels or party plots to host any late-night celebrations. 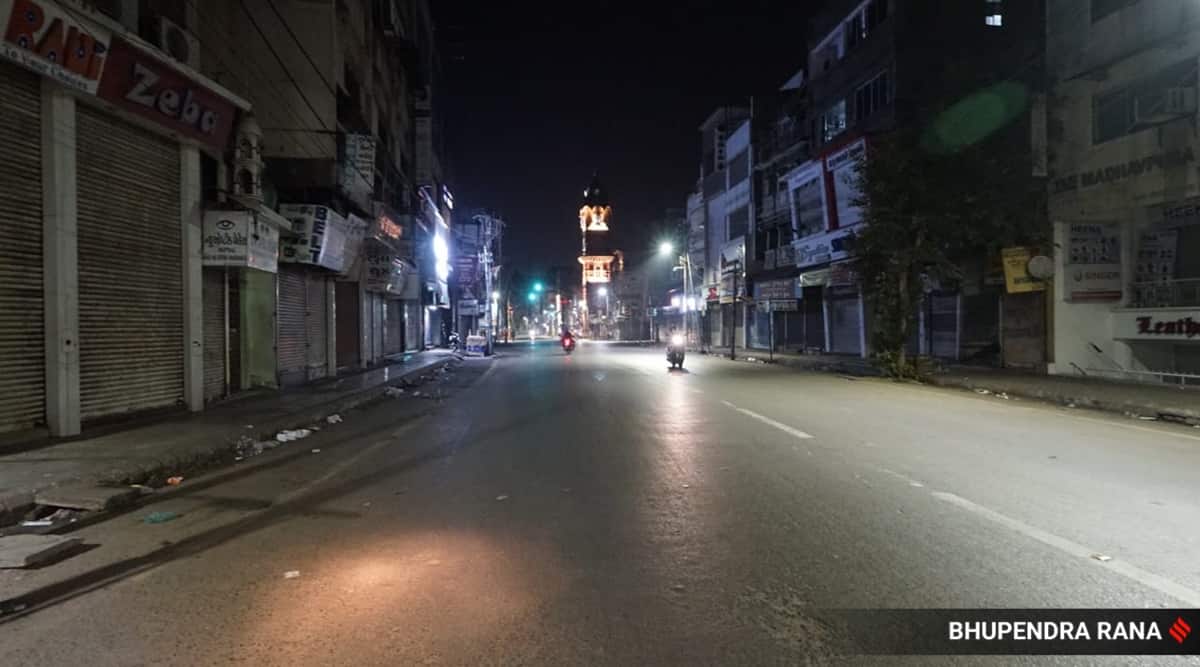 Chief Minister Vijay Rupani Wednesday revised the night curfew timings in Ahmedabad, Vadodara, Surat, and Rajkot from January 1, relaxing it by an hour till Uttarayan. As per the new order, the restrictions will now remain effective between 10 pm and 6 am. Currently, night curfew is implemented in the four cities from 9 pm to 6 am. The police has restricted hotels from hosting any late night parties on New Year Eve on Thursday.

“The chief minister has announced that from January 1 to January 14, the night curfew will be implemented from 10 pm to 6 am in the four metropolitan cities,” a statement issued by the chief minister’s office said.

On Wednesday, the Ahmedabad police issued an advisory stating the ongoing night curfew, between 9 pm and 6 am, will continue in the city on December 31 and prohibited restaurants, hotels or party plots to host any late-night celebrations.

At a press conference at Ahmedabad police headquarters in Shahibaug, Harshad Patel, the Deputy Commissioner of Police (Control Room) said the ongoing night curfew, imposed in the wake of ongoing the coronavirus pandemic, will be strictly implemented in Ahmedabad on December 31 night. “We have a message for the residents of Ahmedabad that they must stay at home after 9 pm and if they have to leave from the city on December 31, then they should kindly ensure their travel plan is done accordingly so that they return home by 9 pm. Those found violating night curfew will be probed and if a satisfactory reason is not given then they will be booked for violation of police notification,” the DCP said.

Patel said a total of seven DCPs, 14 assistant commissioners of police, 50 police inspectors, 100 police sub-inspectors, and 3,500 constables will be deployed across the city to ensure the implementation of the nigh curfew orders. “We will also set up 30 check posts in Ahmedabad city so that people from Ahmedabad rural areas or other cities are not able to enter the city premises post 9 pm without any necessary or valid reasons,” the DCP added.

Only those associated with necessary services, such as milk, medicines, and petrol pumps, are allowed to operate between 9 pm and 6 am at present. Passengers travelling by road to catch a train or flight have also been exempted and allowed to commute.

On the eve of New Year, Patel added, vehicles will be checked rigorously to ensure that there are no instances of drunk driving. Police have been ordered not to use breathalyzers due to the pandemic.

“If anyone is found under the influence of a substance, then their speech and movement will be monitored by the police. If the need arises, their blood sample will be taken on the spot for tests. If alcohol is found in their samples, then they will be booked under the Prohibition Act. No late-night parties by any hotels or restaurants will be allowed and police will be constantly monitoring live CCTV recordings and if any shop is seen open after 9 pm, or we find any assembly of people, then strict action will be taken against them,” Patel said.