Even as most districts point out that the curbs would lead to “inability to take in new Covid admissions needing oxygen support”, the Vadodara administration is devising a revised protocol for hospital admissions to manage under the new O2 limits. AS OXYGEN demand for Covid-19 treatment is on the rise across the country, curbs on oxygen consumption in Gujarat have meant that the state government will now regulate its distribution to the 33 districts according to the need.

On Saturday, Vinod Rao, Officer on Special Duty (OSD) for Covid-19, held a meeting in Vadodara with the elected representatives of the city, led by Minister of State for Narmada Development and BJP MLA Yogesh Patel, to discuss the issue of capping on oxygen supply.

According to Patel the Centre has capped Gujarat’s oxygen consumption for Covid treatment at 1,100 metric tonnes (MT) a day, which is the volume Gujarat produces daily. Till Friday, the consumption for medical use had touched nearly 1,300 MT, officials coordinating oxygen distribution had told this paper.

In Rajkot, where oxgen demand was the lowest among the four top cities, hospitals had begun ‘oxygen audits’ as per the chief district health officer.

Even as most districts point out that the curbs would lead to “inability to take in new Covid admissions needing oxygen support”, the Vadodara administration is devising a revised protocol for hospital admissions to manage under the new O2 limits. 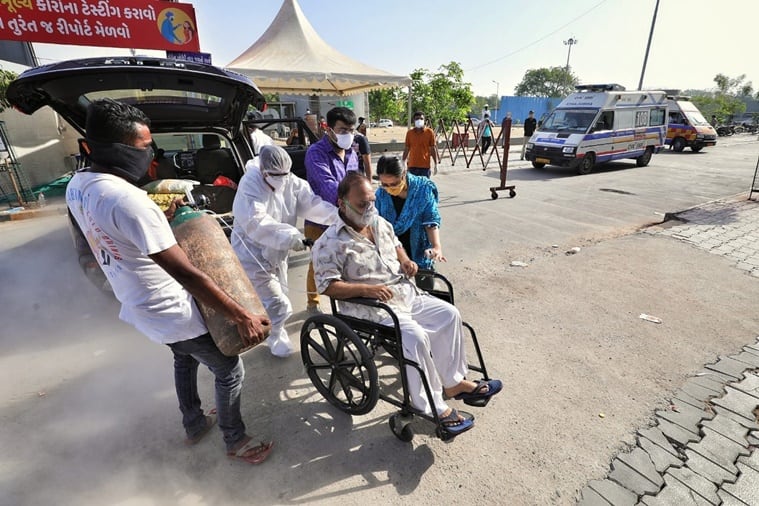 On Friday, the state government appointed Dhananjay Dwivedi, secretary to government, handling Narmada, water resources, water supply and Kalpsar department and Sanjeev Kumar, managing director of Gujarat State Petroleum Corporation as nodal officers to monitor the supply, allocation and distribution of oxygen stock and to supervise its inflow and outflow and formed a state control room as per instructions of the Centre, officials said.

In a statement released on Saturday, MLA Patel said, “The state government has been providing oxygen to major Covid hospitals in Ahmedabad, Surat, Rajkot, Vadodara, Jamnagar, Junagadh, Bhavnagar and Gandhinagar. The supply to these hospitals will continue as it is but the state government will not provide oxygen supply to any new Covid hospital or Covid care centres set up by other institutions. The reason behind this step is to ensure that the system is not disturbed.”

Vadodara has been receiving 160 MT daily in its government and private Covid19 hospitals, but currently, the need has arisen for 170 MT. The best step forward to make up for the deficit will be to reduce the wastage of oxygen that is available.”

For Vadodara district, oxygen consumption has been capped at 160 MT a day – the amount of oxygen that the city consumed on Friday. The capping has left the Vadodara administration in a fix as it was in the process of increasing the number of Oxygen supply beds by 3,000 in extension facilities to admit more Covid patients.

Around 2,500 beds have already been added while the work on adding 500 beds has now been put on hold, a senior official from the administration said. Vadodara has also added 200 ventilators in the past ten days and has asked private hospitals to upgrade their ICU facilities by 50 per cent by procuring more ventilators to treat critical patients.

MLA Patel told The Sunday Express, “The state government is helpless. The Centre has capped the oxygen consumption for all states to deal with the Covid crisis. The situation is such that we cannot actually complain. Vadodara has to manage with [oxygen consumption] between 155 to 161 MT, which is the current rate of consumption but as and when the Centre increases the quota allotted to the state, the cities will get more share. At present, Gujarat will get 1,100 MT and so, the state has to regulate the share between the districts. I have had a word with Chief Minister Vijay Rupani today (Saturday) and he has assured me that no patient will be denied oxygen. We can hope they will revise the share to cities based on the demand in the upcoming days.” 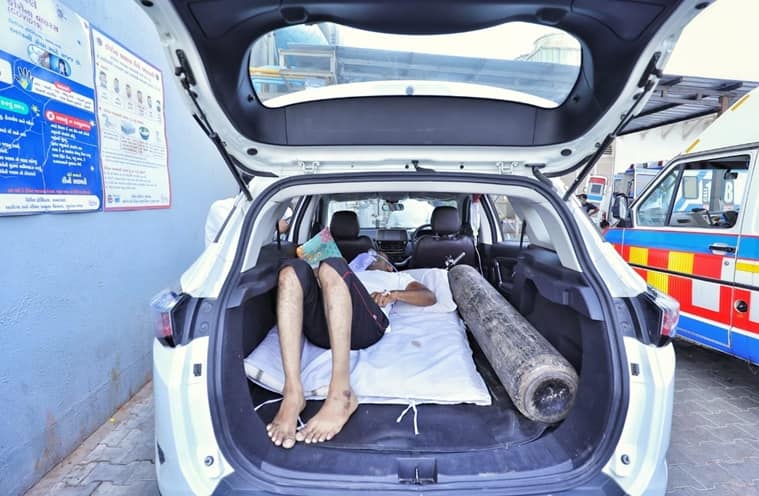 Vadodara, which has a capacity of 13,544 beds, of which 5,817 are oxygen supply beds and 2,463 ICU beds has been facing an influx of patients from several districts in the state as well as patients from outside Gujarat. As many as 9,800 patients are admitted at several hospitals and Covid facilities in Vadodara city on Saturday evening.

Dr Sheetal Mistry, adviser on Covid in Vadodara, said, “We are getting patients from 22 districts of Gujarat and three states: Maharashtra, Rajasthan and Madhya Pradesh. Most of the patients arrive in a condition where they are in need of oxygen or ventilators.

The number of patients from outside Vadodara is so high that the daily consumption of 160 MT may seem smaller compared to Ahmedabad and Surat but one has to also see the proportional size of the city and the population to determine the ratio of demand. At this moment, Vadodara has the maximum number of empanelled beds for Covid treatment and is witnessing close to 300 admissions a day without refusing patients.”

Rao said the cap of 160 MT has meant that the administration will revise its admission protocol, which the VMC had issued on March 30 this year, laying down the parameters for hospitalisations. Rao said, “We have been asked to manage at the existing consumption rate. We will devise some strategy for admissions in order to see how we can manage the continuous inflow of patients.”

An official from Vadodara said the administration was looking at ensuring “uninterrupted oxygen supply to around 50 major hospitals” from Segment II, which are hospitals with ICU facilities, while the other hospitals will be clubbed in a cluster and be asked to coordinate their allocated oxygen usage depending on the number of admissions.

“The government-run hospitals and free beds at Parul and Dhiraj hospitals will be taken care of, while we will ensure that 50 hospitals with ICU facilities do not face any issue with oxygen supply. The rest of the hospitals will have to help each other in optimising the use of resources.”

On Saturday, the Vadodara Municipal Corporation issued an awareness message in public interest on the “importance of oxygen as a drug” and ways in which its wastage could be avoided.

Like Vadodara, the daily consumption of Ahmedabad has been capped at 233 MT while Rajkot and Surat administrations confirmed the capping at 100 MT and 230 MT a day. In Rajkot, the administration has been asked to keep the demand for oxygen limited to around 100 metric tonnes (MT) daily.

When asked if the state government has fixed any quota of oxygen supply for Rajkot, district collector Remya Mohan said, “No such quota has been fixed. But the instruction is no further increase in consumption and to use all methods for reducing consumption by 10 to 15 per cent. We have already been doing this for a while.”

Mohan said oxygen consumption in Rajkot was under 100 MT on Friday. “The instruction is that we can’t go beyond 100 MT till all-India reserves are comfortable. However, there should be no problem for the existing capacity of hospitals to admit patients,” the collector said.

“We have started conducting audits in hospitals with an aim to reduce oxygen consumption at least by 15 per cent. The audit primarily targets preventing wastage of this precious resource by way of shutting off valves of oxygen supply when patients remove masks to have their lunch, to visit the washroom or to attend a phone call. Most of the hospitals have CCTVs and we have identified persons who will monitor footage and alert staff about wastage. Hospitals staff is being instructed to sensitise patients about the value of oxygen and ask them to shut off valves of oxygen lines when they remove their masks,” Dr Bhanderi said.

Surat Municipal Commissioner B N Pani on Saturday said the daily consumption of oxygen in Surat region is 225 MT from which the district supplies to Valsad, Navsari and Tapi districts too. Pani confirmed that for Surat, the cap on daily O2 consumption is 180 MT.

— WITH INPUTS FROM KAMAAL SAIYED in SURAT