Chuhar Khan has been performing for 65 years, says he never heard back from the Ministry of Culture regarding his pension application; his grandchildren have now dropped out of school 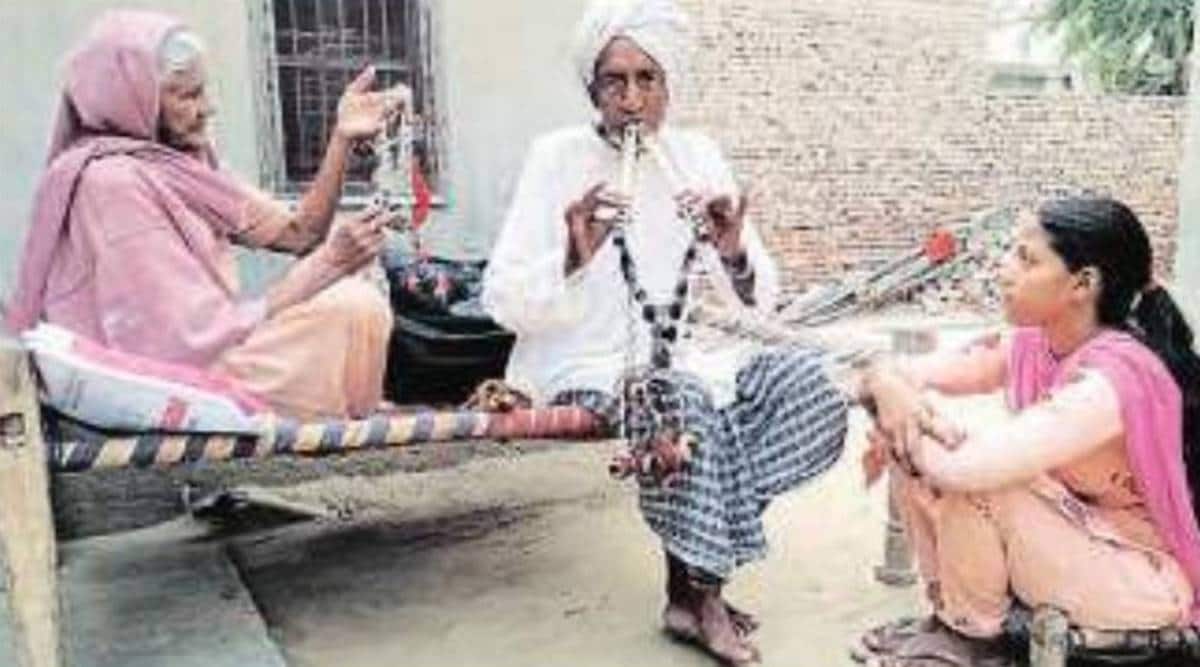 Chuhar Khan is not an unknown name in the villages of Punjab. Even at the age of 80, he spins mesmerising tunes out of his Alghoza, a woodwind musical instrument. The pandemic and lockdown, however, changed everything. A resident of Chottian village of Sangrur district, Khan says, “Though I am 80 years old, I regularly used to perform in melas, and sometimes at cultural functions in schools and colleges. I used to earn Rs 10,000-15,000 a month. It was good enough to manage. I live with my wife and two grandchildren.”

Khan lives in a one-room house with his 16-year-old granddaughter Soni Bano and 14-year-old grandson Raju Khan. His elder son had died in a road accident about 3 years ago and since then, the grandchildren have been living with him. “Their mother lives in Malerkotla and comes off and on to meet them, but these grandchildren are my responsibility. My younger son lives in a separate house and hence I have to make my own living. Since March, I have no work now and old age pension is the only help,” he says.

Khan and his wife Shamo Bano (76) get a pension of Rs 1,500 per month. Both his grandchildren have dropped out of school. His granddaughter, who scored over 90 per cent in her class X board exams this year, had to discontinue her studies as they have no money to buy her a smartphone for online classes. “Even if she attends online classes, our village has school till class X and she needs to travel 10 km away to take admission in senior secondary school. She has no cycle. Hence, once schools open, she will not be able to go. So she discontinued her studies. What can I do? Several months ago, I had applied for a pension in the Ministry of Culture, New Delhi, as well, but I have got no reply from them till now. Someone told me about this pension, and I filled the forms and sent them over with their help. As an artist I have served for nearly 65 years together. I was a teenager when I started playing Alghoza and I am still doing it. It is a rare art and hence, people often used to invite me before lockdown,” says Khan.

His 14-year old grandson Raju Khan also dropped out of class IX after he failed in his exams this year. He is now learning AC repair work. Shamo Bano has poor eyesight, due to which the load of household chores is on Soni. Anurag Bansal, the mathematics teacher at Government High School Chottian said, “Soni is a bright student. She got more than 90 per cent marks. She should not discontinue her studies.”

Khan says, “I have four daughters who are married but all are managing their houses with great difficulty. Moreover, my principles don’t allow me to take anything from my daughters.”

The 80-year-old has performed with many artistes like Fazla from Malerkotla, Harminder Singh Ragi, Dr Ranjeet Singh and many other teams, historian Rakesh Gupta told The Indian Express. He has also participated in the famous Chhapar Mela as part of a team of three persons, which includes a singer and a tumbi (a single-string instrument) player. “We also performed a number of times at the Virasat Mela in Chandigarh, for which I used to stay in Punjab Bhawan for about a week,” says Khan.

“The Ministry of Culture should clear his pension case at the earliest as it is a genuine case. He is a known figure in Punjab villages. He should not live a tattered life and his grandchildren should not leave studies for want of money,” Gupta said.

“Either I get some programmes to perform or the department should give me some pension. How should artistes like me live in old age after performing for decades? There needs to be a social security scheme for us,” says Khan.

When contacted, Sangrur Deputy Commissioner Ramvir said, “I am not aware of Chuhar Khan, he hasn’t applied for pension with the DC office. However, in case he has applied to the cultural department, Government of India, I can check if any communication has come from their side. We can check whether he needs any financial help and get his matter expedited.”

Director (tourism and cultural affairs) Kanwalpreet Kaur Brar could not be reached for comment.