On October 3, four farmers and a local journalist were among eight persons killed after a convoy of three SUVs, including one owned by MoS Home Ajay Mishra, hit a group of farmer protesters, leading to a clash. 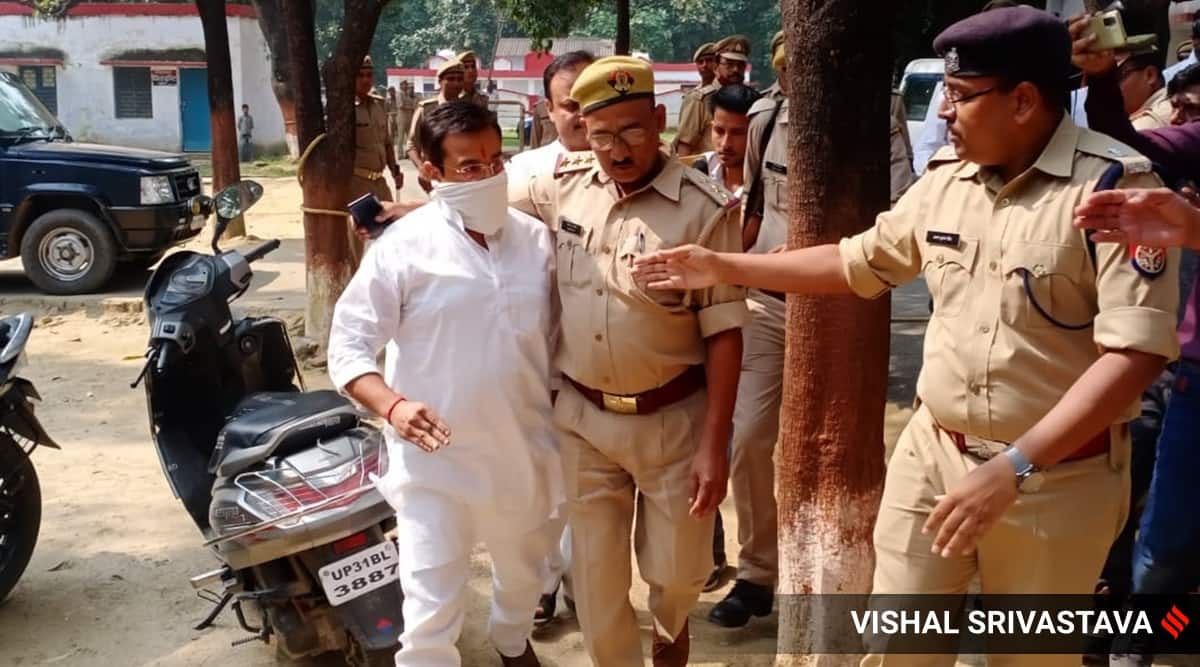 Facing murder charges over the Lakhimpur incident, Ashish Mishra, the son of Union Minister of State for Home Ajay Mishra, was arrested late Saturday night, after questioning that lasted the entire day.

Having skipped the first summons issued to him, Ashish, 40, appeared before the SIT investigating the Lakhimpur Kheri incident, that had left eight dead, at 10.30 am on Saturday — just in time for the second notice. He arrived with his lawyers and BJP MLA from Lakhimpur (Sadar) seat Yogesh Verma (the latter left soon after), at the Crime Branch office in the district, amid heavy police deployment.

Around 11 pm at night, DIG Upendra Kumar Agrawal, heading the SIT, told reporters: “We found that he was not cooperating. He was not telling certain things. On ground of non-cooperation and evasive replies, we are taking Ashish into custody. He will be produced in court tomorrow. We will do sustained custodial interrogation.”

An official said that Ashish Mishra was sent to judicial custody on Saturday night. Around 1 am, he was shifted to the Lakhimpur Kheri jail.

His lawyer informed that the police had sought three days custody, but that will be decided by a local court on Monday.

“He will be in jail till Monday morning. On Monday, a hearing will happen in a local court where it will be decided if he is to be sent to police custody or not,” said his lawyer.

The Samyukt Kisan Morcha (SKM), which is spearheading the farmers’ agitation, Saturday demanded MoS Mishra’s arrest as well on charges of spreading disharmony, and murder and conspiracy, and his resignation from the Union Council of Ministers, warning protests across the country if the demands were not met. At the press conference held in Delhi by the Morcha, Bharatiya Kisan Union (BKU) leader Rakesh Tikait said the farmers who are alleged to have beaten four people to death — after four farmers had been crushed by a convoy, including at least one car owned by MoS Mishra — could not be equated with Ashish

“Theirs was a reaction to an action. We do not consider them accused. And we cannot call it murder. When someone causes an accident, even well-meaning people block traffic and argue in the middle of the road,” Tikait said.

The BKU leader also pointed out that the family of a journalist who was among the dead had said they were being pressured to say the farmers killed him, and that his body had tyre marks. “The truth is… they (the accused) wanted to kill people with three cars,” Tikait said.

The SKM gave a call for farmers to reach Lakhimpur on October 12 for an ‘ardas’ (prayer) being held for the deceased farmers, and said the day would be marked as Shaheed Kisan Diwas across the country. Seeking Mishra’s resignation as MoS and his arrest, the SKM said: “If the demand is not met, a Shaheed Kisan Yatra will be taken out from Lakhimpur Kheri with the asthi (ashes) of the martyr farmers, across UP and each state. The yatra will conclude at a holy or historical place in every district. On October 15, the effigies of the anti-farmer BJP will be burnt. A rail roko movement will be organised across the country on October 18, and eight days later, there will be a mahapanchayat in Lucknow.” The mahapanchayat would be “apolitical”, it said.

Two separate FIRs have been registered at the Tikunia Police Station over the Lakhimpur Kheri incident — one against Ashish and 15-20 others on charges including murder and rioting, and another against unidentified persons for rioting, causing death by negligence, and murder.

ADG (Lucknow zone) Satya Narain Sabat told The Indian Express on Friday that they had come to know names of 10 accused. “Two have been arrested. Five have been identified and we are checking their role. Three others are dead.”

Mishra has denied that his son was driving one of the vehicles that ploughed into the protesting farmers, leaving four of them dead. “The way rioters posing as farmers have beaten people… If Ashish was there, he would have been killed.”

On Saturday, BJP workers gathered at Mishra’s office in Lakhimpur Kheri district in protest against the action against Ashish. Addressing them, the minister said, “There is a rule of law in the country. Our government believes in an unbiased probe. I want to say to all workers that you must keep your faith in the law. The investigating agencies will do the right probe. Those who are guilty will face action, and those innocent won’t.”