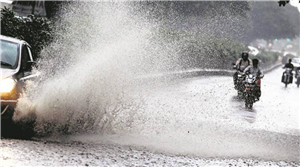 The project seeks to provide much-needed relief to areas like Andheri, Versova, Jogeshwari, and Oshiwara that see flooding during the monsoon. Mumbai is all set to get its seventh stormwater drain pumping station to tackle flooding in the western suburbs. After a delay of several years, the BMC has finalised a contractor for the construction of a pumping station at Mogra nullah in Jogeshwari and is set to table the proposal in its Standing Committee for approval Wednesday.

The project seeks to provide much-needed relief to areas like Andheri, Versova, Jogeshwari, and Oshiwara that see flooding during the monsoon. According to the proposal, the entire project will cost the BMC Rs 393 crore and work will be finished in 20 months, excluding the monsoon period.

Officials from the Storm Water Drain department said the Michigan Engineers Private Limited and Mahalasa Construction Private Limited, the joint venture picked by the BMC, will have to look after the operation and maintenance of the pumping station for seven years.

“The station will have the capacity of pumping out 42,000 litre water per second. It will also have a screen to filter floating materials from nullah so that pumps can function smoothly. This will be constructed over the nullah and no land acquisition is required,” an official from the SWD department said.

After the deluge in 2005, the BMC had planned to construct eight pumping stations to improve the stormwater drainage system in the city. So far, six such pumping stations at Haji Ali, Love Grove and Cleaveland Bunder at Worli, Irla at Juhu, Britannia at Reay Road and Gazadarbandh at Khar Danda have been completed.

“Only Mogra and Mahul projects are pending. Mahul project is stuck because the site is owned by the salt department and they are not ready to hand it over to BMC,” another official said.