“The protest sites are an equal space, an idyllic world, where there is no caste, class, religion or barriers of any kind. There is no divide here, no greed, no individualism and no power struggle," said a former Panjab Universirty Professor Manjit Singh. 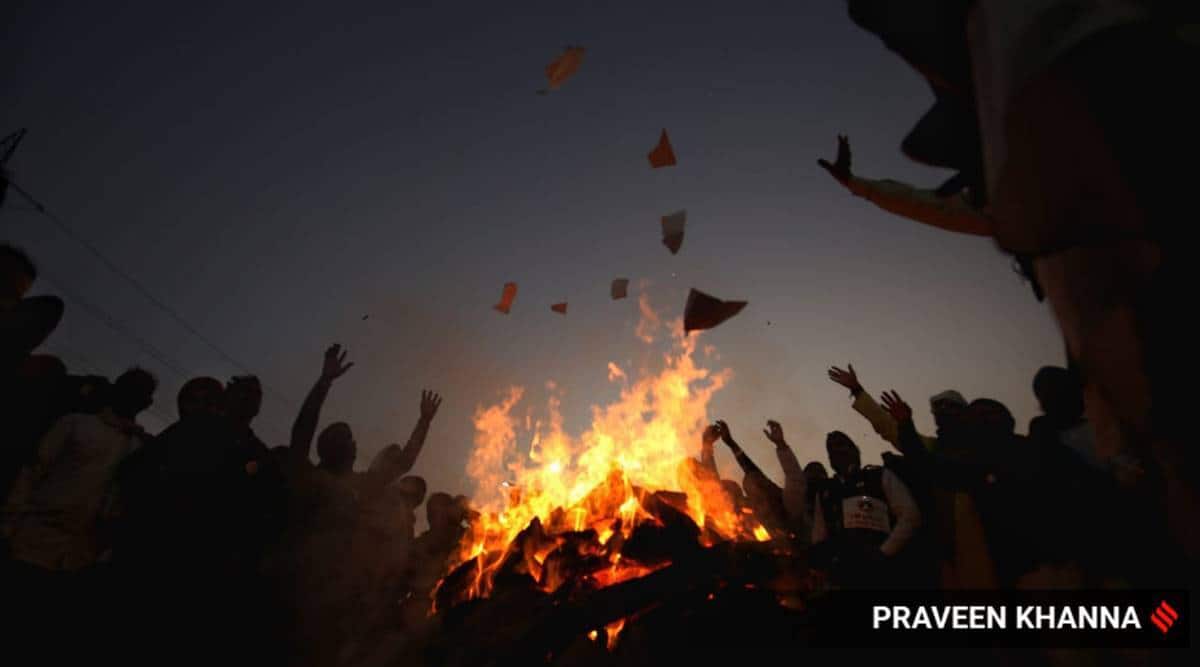 THE fire burnt bright, as did the emotions of people, who came together on a cold Lohri evening at the Sector 17 Plaza on Wednesday to speak, sing, dance, and perform for the farmers protesting for weeks at Singhu and Tikri borders of Delhi.

Standing for the farmers on common ground, and demanding the repeal of the ‘three black farm laws’, people from different walks of life, age groups and ideologies encouraged and inspired by different student groups of Panjab University, Chandigarh, in a symbolic gesture burnt the three farm laws in the Lohri fire, praying and hoping for new beginnings.

Prof Manjit Singh, former professor of Sociology, Panjab University, an integral part of the entire programme, who has for decades been involved in several social movements in Punjab said that Lohri is a celebration of the new and on this special day, they are happy and proud to have garnered urban support for the farmers, with students, the country’s future, leading the way here.

Prof Singh said the need of the hour is to see the farmer protests in a larger perspective, as an instrument of social change.

“The protest sites are an equal space, an idyllic world, where there is no caste, class, religion or barriers of any kind. There is no divide here, no greed, no individualism and no power struggle. It is the world we have always imagined and hoped for, and here we see the dream come true. We have grown up with the ideology of not to take or do any injustice and the spirit of revolution is deep-seated in us. This is mass power and not muscle power, it is systematic, romantic, strong. The flag of our farmers is a symbol of empowerment, of Kisan Raj,” said Prof Singh, a firm believer in the power of the people.

Error 404, Democracy Not Found, United We Stand, Together We Roar, Speak Before It Is Too Late, Jai Jawan, Jai Kisan…the many inspiring slogans that people carried to make their voices and feelings heard.

Actor Gul Panag addressing the large audience talked about the value of the protest, and how it is a long battle, which needs the support of both the urban and rural people and how the impact of this protest will affect our future laws.

“Agriculture is a state subject, so these laws are unconstitutional. Also, will all laws in the future be passed without consensus and debate? Will our right to go to the courts to seek justice be taken away from us? One who protests is not an anti-national. This protest will shape our future,” Panag said.

Music composer and actor Ravi Inder, a graduate from the Department of Indian Theatre, was here to present his two songs written for the farmers and in support of the farmers. “Chardi Kala and Inqualaab are my anthems for the farmers and we will soon be at Tikri and Singh again to shoot videos for these songs, which are also dedicated to Bhagat Singh,” Inder said.

Theatre actor and director Anita Shabdeesh and writer and poet Shabdeesh were here with their theatre group Suchetak Rang Manch to present ‘Je Hun Vi Na Bole’, a street play based on poems by different poets.

The poetry highlighting the times we live in – the pandemic, migrant crisis and how the new farm laws are against the farmers and promise to destroy their livelihood. “Gursharan bhaji walked with the downtrodden and we, the people and artists, are inspired by him to come on the same platform as the farmers to protest,” Shabdeesh said.

As the evening drew people closer to the fire, there were new plans to ‘celebrate’ January 26 in another unique manner, with the farmers and for the farmers.