On July 4, nearly 22 years later, his father Lt Col Tej Prakash Singh Suri (Retd) made a special journey from Mohali in Punjab to a remote post on the Line of Control (LoC) in J&K to inaugurate a memorial to his son’s sacrifice. 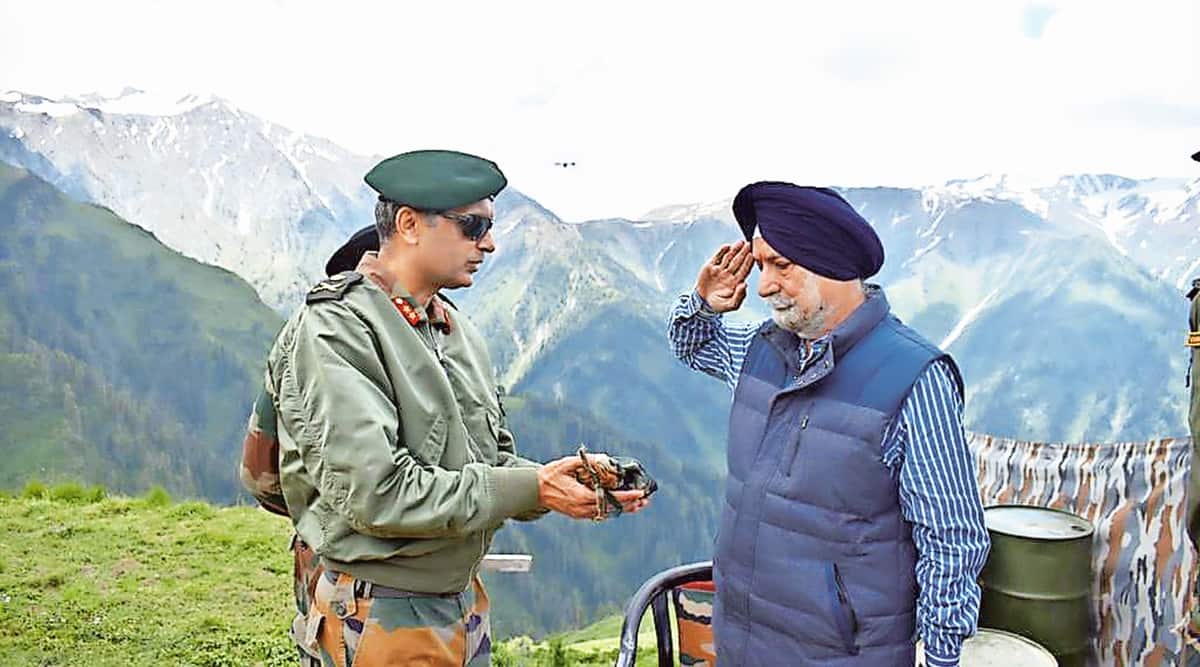 On a cold November day in 1991, a 25-year old laid his life in action after sustaining injuries while pursuing the enemy from across the border at a forward post in Jammu & Kashmir. It had been only two years since Capt Gurjinder Singh Suri was commissioned in the Army.

On July 4, nearly 22 years later, his father Lt Col Tej Prakash Singh Suri (Retd) made a special journey from Mohali in Punjab to a remote post on the Line of Control (LoC) in J&K to inaugurate a memorial to his son’s sacrifice. July 4 was also the birth anniversary of his son who was awarded with the Maha Vir Chakra posthumously.

Lt Col Suri travelled to the forward location, situated at a height of more than 10,000 ft, along the LoC to accomplish his dream of visiting the battlefield, where his son had made the ultimate sacrifice during a raid on Pakistan Army post.

An alumnus of National Defence Academy and commissioned in the Army Ordnance Corps in June 1997, Capt Suri had been serving with 12th Battalion of The Bihar Regiment when he died in action.

Named Operation Birsa Munda, the action was a punitive raid conducted against the Pakistani post in November 1999, at a time when Kargil conflict had drawn to a close.

“This was the time when Operation ‘Vijay’ had drawn to a close, but the LoC was still active with sporadic incidents of trans-LoC violence. In a swift and meticulously planned operation, the entire Pakistani post was destroyed, killing 17 Pakistani soldiers,” defence spokesperson Col Emron Musavi said in a statement.

Lt Col Suri, and Lt Gen GS Chandel, (Retd), the then CO of 12 Bihar, participated in a solemn ceremony at the forward post in Gulmarg sector where the memorial dedicated in memory of the soldiers who died in the operation has been set up. An urn containing the soil from the post was also presented to Lt Col Suri.

A few years back, Capt Suri’s MVC medal was stolen from his parent’s house in Mohali in a burglary. Despite his parents’ strenuous efforts and appeals it could not be recovered. The Army later presented a replica of the medal to the parents.

Citation for award of MVC to Capt Suri

Captain Gurjinder Singh Suri was the Ghatak platoon commander and was located at forward-defended locality in Jammu & Kashmir. On 9 November 1999, the enemy launched an attack on own post, which was successfully repulsed, and the enemy retreated.

Seizing the opportunity, the Ghatak platoon was ordered to pursue the fleeing enemy. Captain Suri immediately deployed his support group to take care of any reinforcement or interference and set out to clear the bunkers one by one. When he saw that one comrade was grievously injured in the process, he quickly moved on with his buddy, to clear the bunker.

He killed two enemy soldiers with his AK rifle and silenced the machine gun. However in the process he received a burst in his left arm. Unmindful of his injury, Captain Suri continued to inspire his men to accomplish the task. He then lobbed two hand grenades into a bunker and entered inside spraying bullets with his AK rifle killing one enemy soldier instantly.

At this point he was hit by an enemy rocket propelled grenade and was critically wounded. He refused to be evacuated and continued to exhort his men till he breathed his last. Inspired by his leadership, the Ghataks fell upon the enemy with vengeance and annihilated them.

Captain Gurjinder Singh Suri, thus, displayed conspicuous bravery and junior leadership of the highest order in the face of the enemy and in the process made the supreme sacrifice.