The state government counsel, however, submitted he was “looking forward very positively” and was “sure the central government will take care of this aspect”. 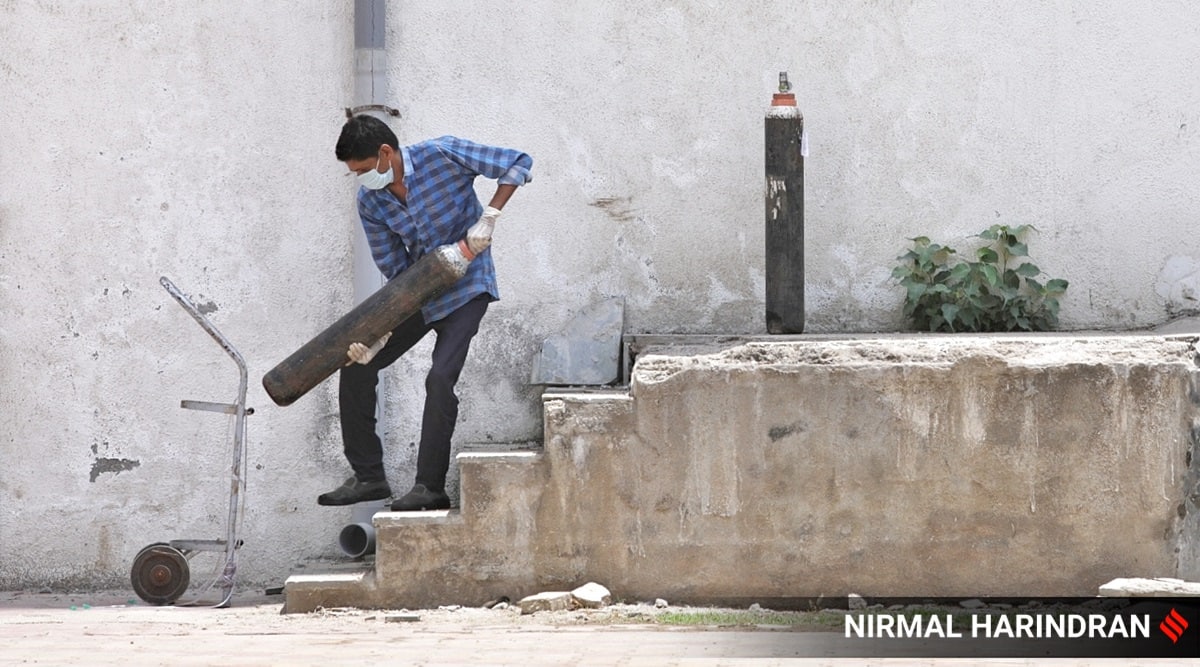 A shortfall of nearly 300 metric tonnes (MT) of medical oxygen is anticipated by April 30, Advocate General Kamal Trivedi informed the Gujarat High Court, which is hearing a public interest litigation taking suo motu cognizance of surge in Covid-19 cases in Gujarat, on Tuesday.

The state government counsel, however, submitted he was “looking forward very positively” and was “sure the central government will take care of this aspect”.

During the hearing Tuesday, senior counsel Shalin Mehta highlighted there was a mismatch between the demand for medical oxygen in Gujarat and the supply plan chalked by the Centre. Mehta, representing three practicing advocates of the Gujarat HC who had moved an intervening application seeking the court’s direction in relation to supply of medical oxygen, said the gap will only broaden in the coming days.

The central government, in a communication dated April 16 to chief secretaries of all states and Union Territories, had laid out the state-wise daily allocation of oxygen supply plan. As per the allocation plan, for Gujarat’s projected demand of 1,050 MT as on April 25, only 1,000 MT was allocated. During the course of submission, Mehta said this shortfall was still a “reasonable” amount of shortfall. However, for a projected demand of 1,200 MT as on April 30, 900 MT was allocated by the Centre, which would result in a “shortfall of 300 MT”, Mehta said.

“From a five per cent deficit, we are going to 25 per cent deficit. This will keep on increasing… It is clear that we have enough oxygen (supply), it is the distribution which is a problem… Therefore, the Centre and the state needs to work this out on how to distribute. Some states are not producing oxygen at all. We are producing enough but it is a logistical and distribution issue, which the court can take care of,” Mehta said.

Admitting that Mehta’s submissions were valid, the Advocate General said currently all oxygen distribution was being controlled by the Centre. “We (Gujarat) have been allocated 975 MT of oxygen (by Centre), which is not (up to) our requirement. Our requirement is going up day by day… In a letter of April 24, 2021, it was stated that as of April 30, 2021, we will be short of oxygen by a quantity of 292 MT. Our request (to the Centre) is to please add 292 MT in allocated quantity of 975 MT and we should be given at least 1,267 MT of oxygen so that we may take care of requirement that is only furthering and furthering. As of today, I am looking forward very positively and I am sure the central government will take care of this aspect… because allocation now is in the hand of the central government and for the right purpose… Central government is seeing to it that oxygen is resourced from all corners. In the meantime, we are trying to see that optimisation (of oxygen usage) is taken care of.”

Gujarat Chief Secretary Anil Mukim, in an April 16 communication to the Department for Promotion of Industry and Internal Trade, Government of India, secretary Guruprasad Mohapatra, had projected 1,500 MT oxygen “shortage”, requesting that Gujarat be supported with the supply of extra medical oxygen to meet its demand.

The division bench, on a parting note, also asked the central government counsel, additional SG Devang Vyas, to consider the communications being sent to Centre by the state government.

Meanwhile, the state government said Tuesday that of the eight pressure swing absorption plants sanctioned for being set up in Gujarat by the Centre, only three was functional so far. While the vendor of one of the plants was blacklisted by the central government, the AG said, the remaining three plants will be functional by May 3.