As part of the initiative the Pimpri Chinchwad police collaborated with a company providing a smart health and activity tracking systems which includes a wristband which for each member of the force a central monitoring system. 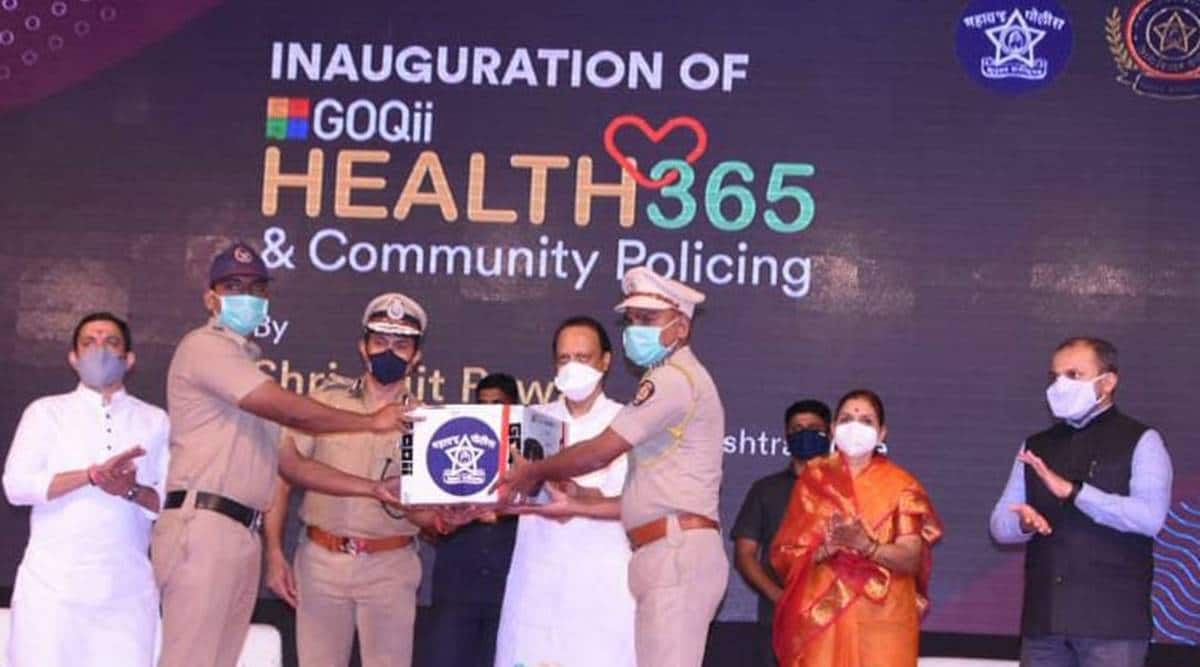 THE Pimpri Chinchwad police jurisdiction in Pune district have launched a system to centrally monitor health vitals and activity parameters of each of its personnel and officers, all of whom have been given wristbands. The scheme was inaugurated at the hands of Maharashtra Deputy Chief Minister Ajit Pawar on Friday. A look at what this system entails, how it is expected to help in increasing overall fitness level in the police force and how COVID-19 was one of the key triggers behind its launch.

What is the centrally monitored health and activity tracker system?

Pimpri Chinchwad is a separate police jurisdiction in Pune district which has under its area of responsibility the Pimpri Chinchwad municipal corporation and some areas from semi urban areas adjacent to it. The force has a strength of over 3000 officers and personnel.

As part of the initiative the Pimpri Chinchwad police collaborated with a company providing a smart health and activity tracking systems which includes a wristband which for each member of the force a central monitoring system.

The health and activity parameters of the cops will also be monitored at the level of individual units like police stations, functional branches, divisions and zones, under the police commissionerate. They are in the process of procuring over 3000 wristbands and central monitoring system for the soon-to-be-launched initiative.

Officials have told The Indian Express that trackers will monitor the activity, pulse rate, sleep cycle etc along with estimates of the oxygen concentration, blood pressure, temperature and a few more parameters. These parameters will be monitored round the clock centrally. The central dashboard will be able to issue early warning, a particular police person shows parameters deviating from the normal. Cops with comorbidities will be able to follow regimes as per their needs and conditions.

The system is brinachild of Pimpri Chinchwad police commissioner Krishna Prakash who himself is a triathlete and has the distinction becombing the first Indian civil servant to complete the arduous Ironman challenge in France in 2017. For the project titled ‘Health 365’ the police have tied up with Goqii, a fitness technology company.

How will the activity and health parameters be monitored?

For the purpose of monitoring, the male and female cops will be divided into age groups of below 30 years, 30 to 39, 40 to 49 and above 50. After initiating the system by filling up basic information and physical parameters, the participants will be given points based on reaching the daily step target, completing sleep and activity logs, food and water consumption and other parameters. Overall health scores will be calculated for everyone and the personnel will be divided in four different categories. Increase in scores will get redeemable reward points and those reporting decrease will get support service and guidance.

The aggregated data will be monitored at various levels. For example officials will be able to understand police station or zone wise sleep hours, activity patterns, food or water intake patterns and suggest changes to the groups along with the individuals. Sudden drops in particular parameters of a group will help police officers make changes in daily routines.

Speaking about the initiative, Krishna Prakash told Express, “There is no denying that overall health is not paid given enough attention among the police force. The very nature of duties being one factor. The round-the-clock monitoring will not only help the cop understand his or her own health and activity parameters but the central dashboard will help us keep track of these things for each one in the force and also preempt any health related issues. It will be a crucial input for taking policy decisions accordingly. This will undoubtedly help is raising the fitness level in the force over a period of time.”

COVID-19 as key trigger behind the initiative

Officials said that COVID was one of the key triggers for the system to be launched. As per the data collated by the Indian Police Foundation (IPF), a Delhi based think tank, there have been around 1.9 lakh cases and over 1100 deaths among the police personnel of various states and the personnel of the Central Armed Police Forces under the Ministry of Home Affairs. Maharashtra, which has the highest number of COVID cases in the country has reported close to 28,500 cases and over 310 deaths among its two lakh strong force, highest among any of the police entities in the country. The 3000 strong Pimpri Chinchwad police force has reported over 600 cases and three deaths.

In September, when police forces across the country were seeing a rapid rise, the IPF had written to state police forces pressing for complete health check ups for their personnel and officers on a yearly basis.

Retired IPS officer N Ramachandran who is the President and Founder of the IPF said, “The overall health of police personnel is always an ongoing discussion but with less than desired work on it. Various factors including nature of duties, odd hours of work result in developing lifestyle ailments among the police personnel especially after 10 to 15 years of service. It has been noticed that while CAPFs do have the system to do annual health check up of the personnel, a large number of state police forces still don’t. In the context of COVID pandemic and deaths due to comorbidities, we wrote to individual state police forces in September to conduct regular annual health check ups.

Even an advisory in this regard from the Union Home ministry may act as a directive for the state police forces who will focus more on improving general health of the police force. COVID-19 pandemic has once again highlighted the importance of raising fitness levels among the police,who have been key frontline workers in the fight against it.”