The Chief Minister had arrived for the meeting a stack of files in black bags, which, sources said, carried report cards of Cabinet ministers and several legislators, and a dossier on the achievements of his government. 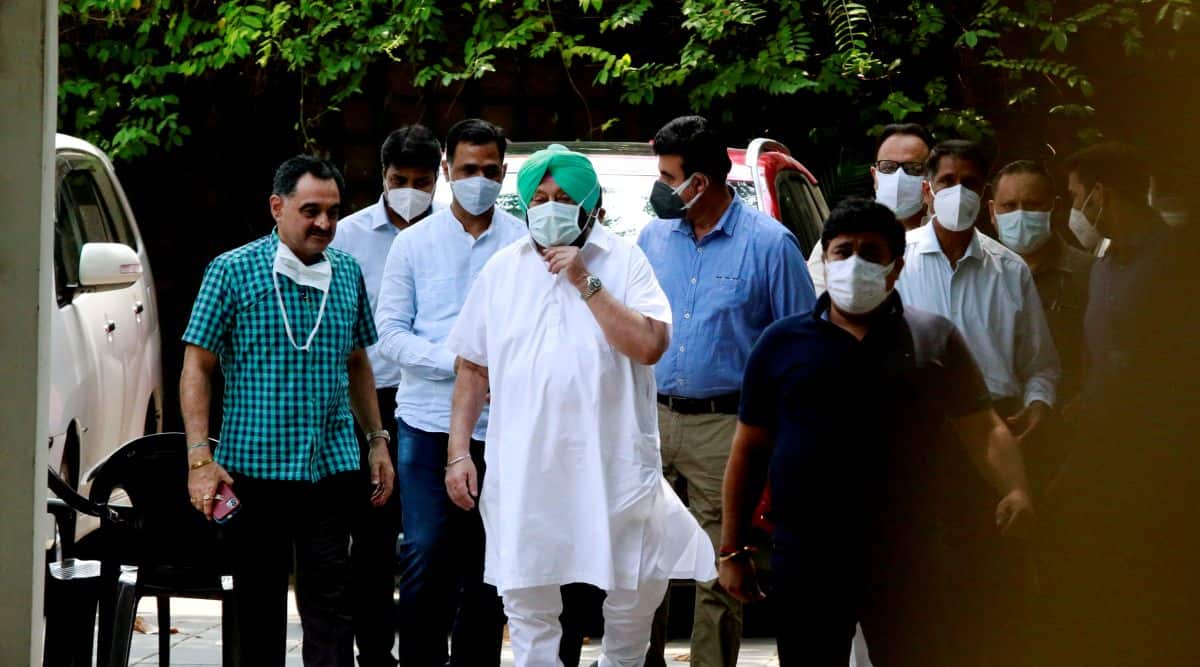 Punjab Chief Minister Amarinder Singh on Friday met the three-member panel set up by the Congress high command to resolve infighting in the state unit. In a meeting that lasted three hours, Amarinder defended his government and replied to the issues raised by party legislators before the panel. Friday was the concluding day of meetings being conducted by the panel headed by Leader of Opposition in Rajya Sabha Mallikarjun Kharge, and Amarinder was the last leader to be heard.

The Chief Minister had arrived for the meeting a stack of files in black bags, which, sources said, carried report cards of Cabinet ministers and several legislators, and a dossier on the achievements of his government.

After emerging from the meeting, Amarinder told the media that they discussed 2022 Vidhan Sabha elections.

“I will not tell you what we discussed as it is between the panel and me,” he added on being asked to elaborate.
The panel was constituted by AICC president Sonia Gandhi to provide a report on the recent crisis in Punjab Congress.

In several one-of-one meetings spanning over five days, the panel met about 150 party leaders, including 80 Congress legislators, eight Lok Sabha and Rajya Sabha MPs. Besides, the leaders of frontal organisations and defeated candidates were also given a hearing.

Sources said the panel told the CM about the issues raised by partymen and he answered all the questions raised, and few of those replies were supported by documents. He is learnt to have given a report on status of investigation in the sacrilege case, explained the allegation that bureaucracy was ruling the roost, and also addressed the allegation of quid pro quo with Akalis. Further, allegations against legal department for not defending cases, inaccessibility were also addressed by the CM in his replies.

J P Aggarwal, a member of the panel, told the media after the meeting that the CM responded to all the issues one by one.

“The honourable CM explained all the issues that were raised by his partymen. He gave us all replies. He has responded to all the issues. Everybody’s concerns will be addressed. We spoke to the CM about everybody whosoever had any issue with the government,” he said.

About what all kinds of issues were raised, Aggarwal said, “There were no major issues. These were the usual issues that every political person has. They raised these issues. We will note these in the report.”

About whether the committee has recommended any change in the report, he said, “Recommending any change was not our mandate. We were mandated to talk to all the partymen and then give a report to the high command after gauging the situation.”

On whether the committee has a view on the major demand of delay in justice to police firing victims, he reiterated, “Captain has responded on all the issues raised. We will give our report. “

Aggarwal refused to say anything on banner of revolt raised by Navjot Sidhu, Pargat Singh and Partap Singh Bajwa.

“We will resolve everything. But let us not take any names because all the senior leaders had appeared in front of the panel. These people were also among them,” he added.

The final report will be given to Congress chief Sonia Gandhi in a day or two, Aggarwal said.

Sources revealed that before the meeting with Amarinder, AICC leaders Rahul Gandhi and Priyanka Gandhi had a virtual meeting with the panel members Thursday evening.

Amid the rounds of meetings, political strategist Prashant Kishor met the Chief Minister at Kapurthala House on Friday afternoon. Both are learnt to have had an hour-long discussion. The meeting took place after CM met the three-member panel.

Kishor, who was appointed Principal Advisor to the CM by Amarinder a few weeks ago, has not been coming to Punjab after the recently Assembly election results of four states fuelling speculation that he was not interested in strategising for Amarinder. Also,sources said he had been promising that his team would be reaching Chandigarh but nobody had arrived here yet.

Kishor had indicated after the Assembly election results that he would not be strategising for anyone anymore. Before the election results, he had come to Punjab, had held meetings with legislators and officials and asked them a timeline in which they could fulfil the promises made by the government.

It is also learnt that Kishor had held meetings with a few legislators also in Delhi while they were here to appear before the three-member panel.