The former MLA assured to look into the complaints but as she got into her car, some of the residents continued to complain. 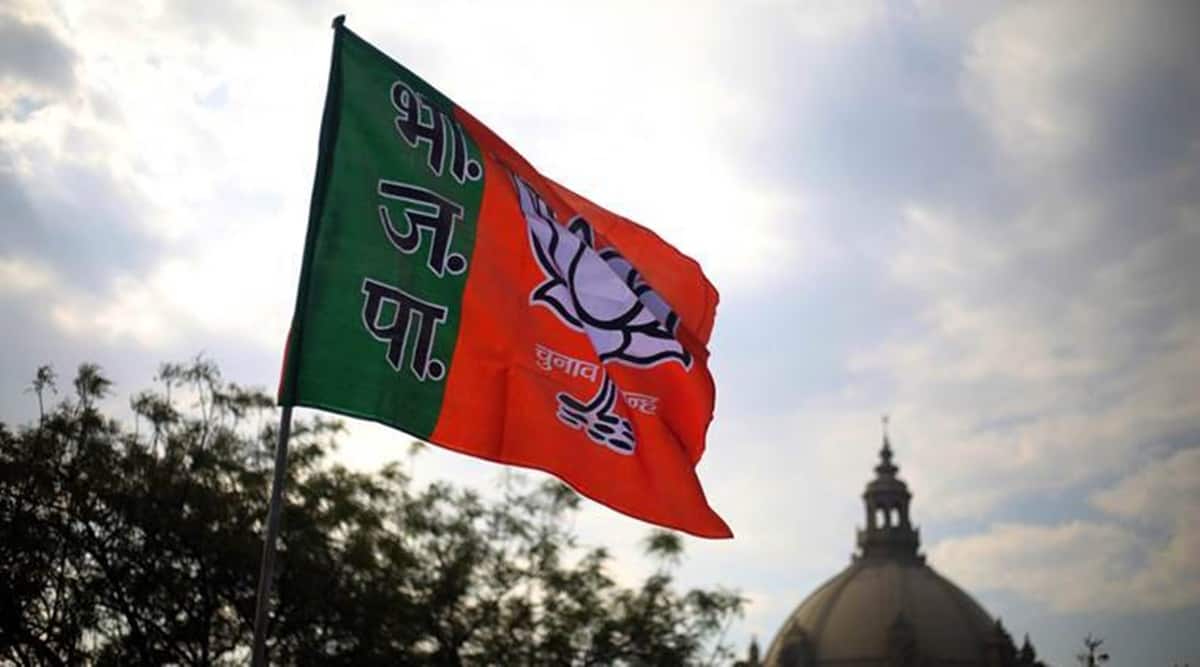 Two-time Bharatiya Janata Party MLA Bhanuben Babariya and the party’s three other candidates, Durgaba Jadeja, Alpesh Morjariya and Hari Khimaniya, for the upcoming Rajkot Municipal Corporation (RMC) election, hit the road with door-to-door campaigns at civic ward 1 on Sunday. While in some areas, voters came forward with complaints about roads, common plots and streetlights, at a few others people huddled for photos – the politicians obliging each with a patient hearing or smile.

The civic body’s ward no 1 with around 78,000-odd voters has traditionally been a BJP bastion. The party, which had won all four seats from the ward in 2015, dropped two of its three sitting corporators — Babu Ahir and Ashish Vagadiya and Anjana Morjariya — this time while giving ticket only to Jadeja. Instead, the ruling party has fielded Babariya, who was elected MLA from Rajkot-Rural (SC) seat in 2007 and 2012. Alpesh is Anjana’s husband, while Khimaniya is a new face.

On Sunday morning, Babariya and Jadeja began their campaigning by waving and greeting residents and passersby at Shantiniketan Residency, a middle-class neighbourhood near Alap Green City on posh Raiya Road. Near the end of the street, as homemaker Vandana Rathod welcomed the two women candidates, Babariya responded with a polite: “Dhyan rakhjo (Do remember us)”. The two politicians also paid obeisance at a small temple dedicated to Lord Swaminarayan at her house.

“Babariya and I are both are devotees of Lord Swaminarayan and often meet during events at Swaminarayan temple on Kalavad Road. Since I was looking after public relations, it was natural for me to know important people,” Rathod told The Indian Express later.

From row houses of the housing society, Babariya and Jadeja set out for Dwarkesh Park through street ‘C’ of the residency in the former’s car. As their vehicle slowed down due to traffic congestion on the narrow road, they were greeted by a motley group of residents of street ‘C’, with a middle-aged man urging the politicians to “do something about this nagging problem”.

Asked what the problem was, the man told Babariya: “You just stand here for three minutes and you would realise yourself. Residents of A and B wings of Shantiniketan (Residency) have blocked their roads, diverting all the vehicular traffic going towards Dwarkesh Society, Sopan Heights, Dream City and around a dozen other societies, to our society road in ‘C’ wing. You must get the two roads opened.”

Even as the 58-year-old man withdrew soon after, a few other women gathered around the two BJP leaders and enlisted a host of problems the area was facing. “This society road has been witnessing vehicular traffic, almost like a highway, and there have been accidents as well. Thank god, our children are safe so far,” Jagruti Dave, a homemaker, complained. Another Jayesh Rachh said, “Some influential people live in Shantiniketan ‘A’ and ‘B’ wings, so the RMC is doing nothing about this illegal blocking of society roads on their part.”

The former MLA assured to look into the complaints but as she got into her car, some of the residents continued to complain.

“We do support the BJP, but a feeling is growing that they are not working for us,” the 58-year-old man’s wife told The Indian Express.

Rachh added, “We have been voting the BJP but if this continues, we will have to think about other options. Aam Aadmi Party has done so much work in Delhi. Why not give that party a chance here!”

After Babariya and Jadeja reached Dwarkesh Park, a neighbouring society, they were joined by Morjariya and Khimaniya, and Bar Council of India member and a local BJP functionary Dilip Patel.

At the entrance of the society, Trupti Dana, a homemaker, extended a traditional welcome to the BJP candidates by asking children to apply tilaks and garland the politicians. “We have to support (Prime Minister) Narendra Modi. I always want the BJP to do well,” she told The Indian Express.

A little away, a group of men from the society greeted Morjariya and Khimaniya. “We assure you of our support. But you must do something for the development of the common plot of our society. As it is not developed, slum-dwellers who are camping on its edge, are throwing garbage in the plot. Entire society does not have any recreational space,” Raju Trivedi, a trader, told the two BJP candidates while showing them the said plot. “Roads have not been resurfaced in our society for the past 8 years and you can see the potholes yourselves. It is not that Babu Ahir did not try to resolve our problems but he had his limits. But we need to keep fighting,” the trader said, adding that he also supports Ram Temple project in Ayodhya.

Suresh Goswami, another resident of the society, said, “Even if you don’t manage to do it, we will still be supporting you (the BJP candidates) but with a great degree of disappointment.”

Having covered the society, the four BJP candidates assembled at the entrance of the society again where they were introduced to Dharmesh Sheth, the president of the cooperative housing society, who assured that the “entire society would vote for the BJP”.