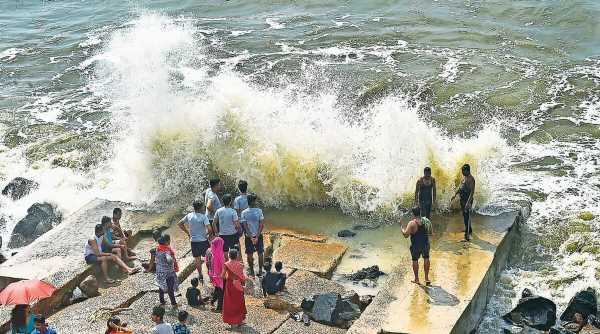 The Maharashtra government had to call in the NDRF for rescue operations. Government agencies rescued more than 300 people. At least eight persons died as torrential rain caused flood havoc across the Marathwada region of central Maharashtra and parts of the state’s eastern region of Vidarbha.

Homes and fields were submerged, and the administration had to scramble to relocate families and livestock in a total of nine badly affected districts as a depression caused by Cyclone Gulab, which made landfall on the east coast, dumped rain on Maharashtra, especially on the drought-prone Marathwada region.

The state government had to call in the NDRF for rescue operations. Government agencies rescued more than 300 people.

Some districts of Vidarbha were also affected. A Maharashtra State Road Transport Corporation spokesperson said that four people died when a bus bound from Nagpur to Nanded was swept off an inundated culvert at a village in Yavatmal. Two injured passengers were rescued.

This is the third natural calamity to strike Maharashtra after Cyclone Tauktae in May and the severe rain that caused floods and deadly landslides in Konkan and Western Maharashtra in July this year.

Heavy rain lashed all eight districts of Marathwada over the last two days, filling up several dams in the region, as a result of which water had to be discharged from these catchments, causing flooding downstream. Rain continued to pour in the area through Tuesday.

All 18 gates of Manjara dam and 11 gates of Majalgaon dam, both located in Beed, had to be opened, resulting in water discharge of 78,397 cusecs and 80,534 cusecs, respectively. The water release caused flooding in Beed and adjoining Latur districts. In neighbouring Nanded, the water discharge from Vishnupuri dam was highest at 1,11,594 cusecs.

In a state cabinet meeting on Tuesday, Chief Minister Uddhav Thackeray asked all guardian ministers of affected districts to go on inspection tours. He has called another meeting of cabinet ministers and government officials on Wednesday evening.

Water Resources Minister Jayantrao Patil, who was touring Beed district, said, “All eight districts of Marathwada — Beed, Latur, Osmanabad, Jalna, Parbhani, Hingoli, Aurangabad, Nanded — are hit by the cyclone (Gulab). The heavy rain for the last 24 hours led to overflowing of dams, canals and rivers. We are closely monitoring the level of rain in the catchment areas of Jaikwadi dam.”

Jaikawadi or Nathsagar, the largest irrigation project on the river Godavari in Paithan in Aurangabad district, was 84 per cent full.

Patil, who reviewed dam water levels across the state, said, “The water rise in Godavari river flowing through Nashik is a concern. We have directed the district collectors to relocate families along the river banks to safer destinations.”

Nanded DIG Nisar Tamboli said, “Many areas are under water and all dams except Jayakwadi are full. The doors of all these dams are opened. If the flow increases at night, then Nanded may face flooding.”

PWD Minister Ashok Chavan, who hails from Nanded, said, “The damage to Marathwada is extensive. There is damage to crops, roads, bridges and power supply network. The CM has called a meeting tomorrow (Wednesday) to assess the situation.”

The damage to agricultural areas and houses is yet to be quantified, but government officials said the damage to the standing kharif soya crop was bound to be extensive. Livestock was also lost.

The Indian Air Force sent two helicopters, which airlifted one team each of the NDRF for rescue operations in Latur and Osmanabad districts.

In Sarsa village in Latur, the NDRF deployed boats and a helicopter for the rescue of 47 persons stranded on the banks or river Manjara, according to district administration officials.

Latur District Collector Prithviraj B P said, “At least 158 villages in the district were hit by the dam water discharge.”

In addition, 16 people were rescued by an NDRF helicopter in Osmanabad.

Minister for Relief and Rehabilitation Vijay Waddetiwar said, “Farmers are the worst hit by the cyclone. Their entire crop has been damaged. Apart from the state’s compensation under NDRF norms, we will urge the Centre to provide adequate financial assistance.”

Medical Education Minister and Latur Guardian Minister Amit Deshmukh said, “The irrigation department has discharged a lot of water from the dams and as a result, the fields have gone under water. If the water level does not recede, there will be great damage to soyabean crop. We have asked the agriculture and revenue machinery to do the surveys immediately.”

Deshmukh was touring Latur at night. He said that a complaint was received in Ahmedpur area in Latur of an unknown person getting washed away in floods and the authorities were verifying it.

Beed Guardian Minister Dhananjay Munde, who was also on a tour of his district, said the government would help the farmers.

Of the 11 districts in Vidarbha, the worst hit by the rain were Buldhana, Akola, Washim, Yavatmal and Chandrapur.

The Nanded-Nagpur bus (MH14 BT5018) was swept off after departing from Umarkhed for Nagpur. The driver decided to drive into the swollen nullah. “But the edges of the culvert were not visible due to overflowing water, resulting in the driver taking the bus down the culvert from the left side. The bus was then swept some distance by the strong water current and got stuck to a tree. There it got quickly filled up with water,” said Yavatmal Superintendent of Police Dilip Bhujbal.

The survivors are Sharad Fulmali, 28, and Subramaniam Suryanarayan Tokla, 48. The deceased whose bodies were recovered were bus conductor Bhimrao Nagarikar from Nagpur, Sheikh Ibrahim, 50, from Hyderabad and Indal Ramprasad Mahindra, 35, from Karol village in Pusad. Driver Suresh Surewar from Nagpur is yet to be traced.

The incident was captured on mobile phones by onlookers

MSRTC managing director Shekhar Channe said the kin of passengers who had died would get Rs 10 lakh each.

Though areas in north Maharashtra including Nashik, Dhule and Nandurbar, and Konkan areas including Raigad, Thane, Palghar and Mumbai and its suburbs were also drenched, there were no reports of untoward incidents from these areas. In western Maharashtra, Pune and Solapur experienced heavy rain.