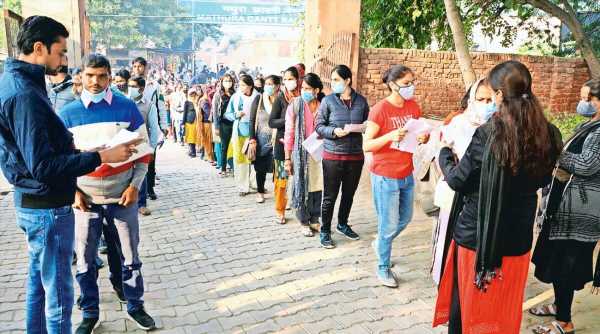 UP Police said they arrested 26 people since Saturday night using technical and other intelligence from different cities in the state. Shortly before the recruitment exam for government teachers in Uttar Pradesh – Uttar Pradesh Teacher Eligibility Test or UPTET, 2021 – was set to commence on Sunday morning, the state government announced its decision to cancel it over an alleged leak of the question paper. The examination is now likely to be held next month.

UP Police said they arrested 26 people since Saturday night using technical and other intelligence from different cities in the state.

“Thirteen people were arrested from Prayagraj and four from Lucknow. Arrested persons also include residents of neighbouring Bihar… The Special Task Force (STF) of the UP Police will conduct the investigation and take action against people and organisations responsible for the paper leak,” Additional Director General (Law & Order) Prashant Kumar said.

Those arrested in Prayagraj include Satya Prakash Singh, an assistant teacher at a primary school in the city, police said.

When searched, he was found to have the solved question paper in his WhatsApp.

Rajendra Patel — the alleged mastermind of the whole operation — and Chaturbhuj Singh, one of the key players, were also among those arrested from Prayagraj, according to the statement. Police also arrested other members of the gang, including one Sunny Singh, who was instrumental in sourcing solvers from Bihar, the statement said.

Four persons were arrested from Lucknow district, and one each from Kaushambi, Ayodhya, and Ambedkarnagar district.

Meanwhile, assuring strict action against those involved in the paper leak, Chief Minister Yogi Adityanath said at a public rally in Deoria that police would invoke the stringent National Security Act (NSA) and Gangster Act against them.

Later in a tweet, the CM said that the properties of those involved in the leak would be seized by the government. “The state government is standing with the candidates of UPTET, and a re-exam will be held in a transparent manner within one month… Those who have played with the future of our young brothers and sisters will not be spared,” he said.

Meanwhile, Samajwadi Party chief Akhilesh Yadav blamed the BJP government for the leak, saying such incidents have become a norm under its rule.

Congress general secretary Priyanka Gandhi Vadra too alleged that corruption in education and recruitment has become common under the BJP.