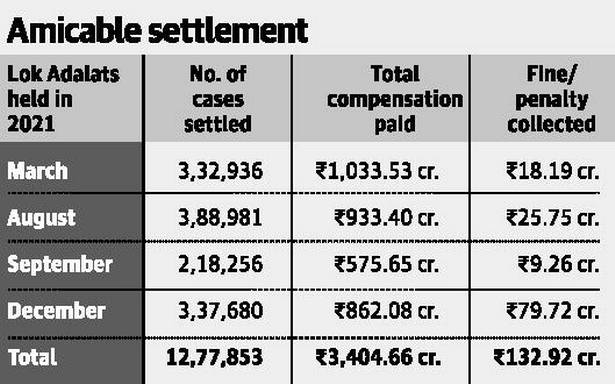 Many decades-old cases were resolved during sessions

A 37-year-old case related to a property dispute in Dharwad, a civil suit pending for 22 years in Bengaluru, and grant of 1.28 guntas of land as maintenance for a divorced wife in a 17-year-old suit in Hassan district were among the 3,29,074 cases resolved during a Lok Adalat held on December 18 from amongst the cases pending in various courts in the State.

The Lok Adalat also saw amicable resolution of 113 cases pending in commercial courts, and 25 cases pending in industrial tribunal in the city resulting in disbursement of ₹157 crore and ₹2.03 crore respectively as settlement amongst the parties.

Briefing journalists about the outcome of the fourth national Lok Adalat conducted by the Karnataka State Legal Services Authority (KSLSA) across the State this year, Justice B. Veerappa, a judge of the High Court of Karnataka, and the Executive Chairperson of the KSLSA, said 1,528 matrimonial disputes too were settled across the State and in 37 of these cases, the couples reunited leaving behind their differences.

While a total amount of ₹3,404 crore has been paid as compensation to the litigants in land acquisition, motor vehicle accidents claims and other disputes, a total ₹132 crore have been collected towards the state exchequer by way of fine by compounding minor offences during these four Lok Adalats, said Justice Veerappa.