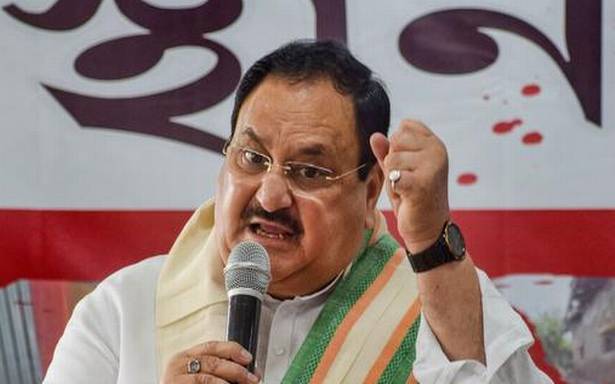 Questioning the silence of Chief Minister Mamata Banerjee on the post-election attacks directed at the BJP workers, party national president J.P. Nadda on Wednesday said 14 workers of the party had been killed in the violence so far and about one lakh people had been affected.

“I had earlier prepared notes that the number of BJP workers killed was nine — now the tally has increased to 14. I do not know where this number will stop. This is a matter of grave concern for us but the BJP strands strongly with every party worker,” he said at a press conference in the city.

Mr. Nadda, who is on a two-day visit to the State, described the attacks as “State-sponsored violence” also raised questions why the champions of human rights were silent on the attacks.

The BJP president said the BJP with 77 seats and over 37% votes will play a role of responsible Opposition. Post-election violence started from the evening of May 2, when the counting of votes was on.

“For 36 hours after the results, the caretaker Chief Minister was silent on these attacks. Mamataji’s silence speaks about her involvement and she is starting her third term with blood on her hands.”

At a time when the Chief Minister was being administered the oath, the BJP leaders including the elected representatives sat in protests at the party headquarters in the city.

Mr. Nadda, who over the past few days has met the family members of the BJP supporters killed, said in some parts of the State like Sandeshkhali and Gosaba entire villages have been ransacked. He said people have even fled from Cooch Behar district to neighbouring Assam to save their lives.

Asked whether the BJP was contemplating to seek imposition of Article 356 in West Bengal, Mr. Nadda said the prescribed procedure is that a report is generated by the Governor and the Ministry of Home Affairs takes a decision on this.

“As far as the BJP is concerned, even if it is a fit case [for the imposition of Article 356], we are people who fight democratically,” Mr. Nadda said.

Chief Minister Banerjee, after being sworn in as the Chief Minister, appealed to the people not to indulge in violence. She said violence is more in the areas where the BJP has won. Four supporters of the TMC have died in the violence so far.