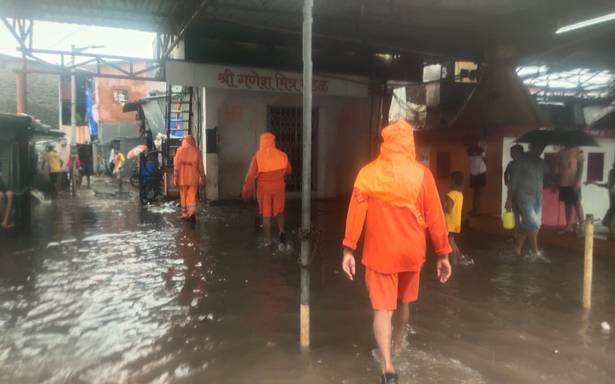 IMD has issued a red alert for Mumbai in the backdrop of heavy rains, a BMC official said.

Fifteen people died in two different incidents of house-wall collapse in Mumbai at early morning on Sunday due to incessant rains in the city.

At Vashi Naka area in Chembur, twelve people died after the retaining wall of a house collapsed after a tree fell on it at 1 a.m. According to preliminary information from the Brihanmumbai Municipal Corporation (BMC), two more people are being treated at Rajawadi hospital.

In the second incident, three people died at Surya Nagar in Vikhroli after 4-5 hutments collapsed due to a landslip at 2.40 a.m. Two more were injured and have been admitted to a nearby hospital.

At many places in the city, the rainfall mark crossed 200 mm within a couple of hours.

The suburban train services on both Central Railway and Western Railway in the financial capital were suspended due to water logging in the tracks due to the overnight heavy downpour, railway officials said.

The India Meteorological Department (IMD) has issued a red alert for Mumbai in the backdrop of heavy rains, a BMC official said.

A sudden change in climatic conditions led to Mumbai witnessing over 100 mm rainfall in six hours, the IMD said in an early morning bulletin. It also changed the rains forecast for the city from orange to red alert.

The IMD said that till 6.30 a.m. on Sunday, Mumbai and adjoining areas received over 120 mm rainfall in preceding 12 hours.

Mumbai would receive “heavy to very heavy” rainfall at a few places with extremely heavy rainfall at isolated places, the IMD said.

Extremely heavy rainfall means precipitation of more than 204.5 mm in 24 hours, while heavy rainfall ranges between 115.6 mm to 204.4 mm rainfall, as per the IMD.

Central Railway said that due to water logging in tracks at Dadar, Parel, Matunga, Kurla, Sion, Bhandup and other locations, train services on main line were suspended between CSMT and Thane.

Several long distance trains on both Central railway and Western Railway were affected due to the flooded tracks.