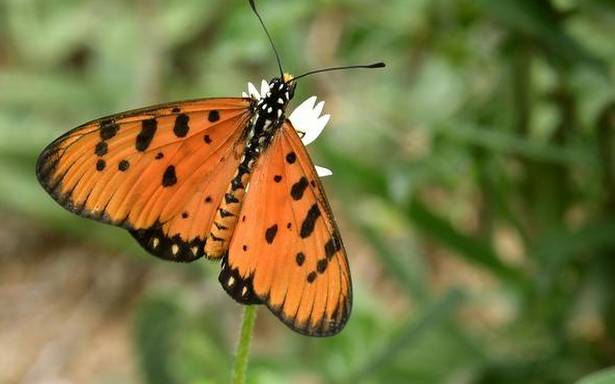 Some rare and endangered species also spotted, according to new book Butterflies in Bengaluru

For a city that often attracts lamentations of a fading ‘garden city’ tag, Bengaluru and its surroundings boast of a butterfly diversity that will surprise its residents.

In a book that is deemed as the first such dedicated to the city’s winged visitors, the authors have revealed that Bengaluru and its surroundings recorded no less than 179 species of butterflies.

Butterflies of Bengaluru by Krushnamegh Kunte and Nitin Ravikanthachari is an initiative by the Karnataka Forest Department (Research Wing), National Centre for Biological Sciences (NCBS), and Indian Foundation for Butterflies, Bengaluru.

Terming Bengaluru as an important transition zone due to its location — north of the hill ranges that connect the Western Ghats with the Eastern Ghats — the book identifies the city as one that supports “considerable” diversity of butterflies as a result of the myriad habitats it is composed of.

Apart from offering a pictorial guide to all species of butterflies that are found in Bengaluru, it provides information on habitats, seasonal occurrence, and prominent places where the species are found. There is also a checklist of the plants that butterfly caterpillars feed on, and a list of flowering plants that attract butterflies.

Prof. Kunte, associate professor at NCBS and chief editor of the Butterflies of India website, told The Hindu this is the first such book, as what was attempted earlier was a brochure for quick reference.

According to the authors, as habitats change corresponding to the climate and green cover, as well as with an increasing number of butterfly watchers, the list of butterflies in the city has been expanding at the pace of one to three new species every year since the last few years.

Of the 179 species recorded, there were some spectacularly rare ones, such as the Lilac Silverline (Apharitis lilacinus), which, Prof. Kunte said, was seen in India after nearly 100 years. Two species that were recorded in Bengaluru for the first time in 2020 were the Orange-tailed Awl (Bibasis sena) and the Alida Angle (Caprona alida).

Does the changing ecosystem of the city have an impact? It is logical that there will be an impact, said Prof. Kunte, offering the 2020 lockdown as an example when the traffic went down tremendously, having a positive influence on the ecosystem in general.

Elaborating further, he said from the nine-year data, it can be deduced that the movement of butterflies is tightly linked to monsoon. “Butterfly and birds migration is driven by cold winters. India is unique, especially peninsular India, as it is driven by the Indian monsoon,” he said.

According to the book, which covered a 60-km radius from the Bengaluru GPO, among the butterfly hotspots in the region are the Doresanipalya Forest Research station, Bangalore University, Valley School, IISc. campus, GKVK campus, Lalbagh Botanical Garden, Hesaraghatta, Savandurga State Forest, Camp GeeDee (near the Bannerghatta National Park), Makalidurga, Nandi Hills and Horagina Betta, and Devarayanadurga.

“Bengaluru definitely has more than other tropical cities, and the Karnataka Forest Department is also doing a wonderful job. The Bengaluru Butterfly Club is seeing growing membership with a wide ranging profile from 10-year-olds to retired officials. One way people can start contributing is by reporting to the website with information,” he said, adding that this will help make recommendations on plants that are butterfly-friendly to be planted by the authorities concerned, as well as citizens.

For further information, contact Indian Foundation for Butterflies on 6362512292.