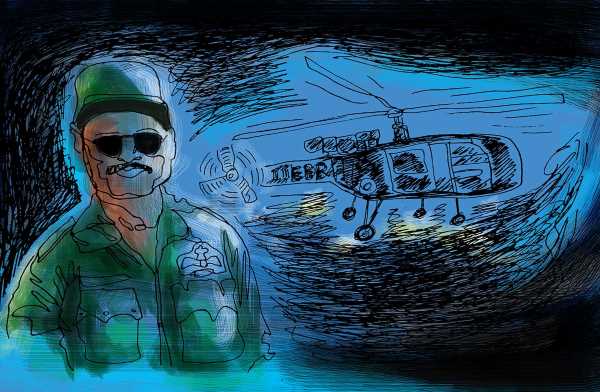 ‘You are to train three Bangladeshi pilots to fly this Chetak helicopter. Your task begins now.’
Air Commodore Nitin Sathe (retd)’s thrilling account of how the Bangladesh Air Force was born.

In my last piece on the formation of the Kilo Force and the Kilo Flight, says Air Commodore Nitin Sathe (retd), I had mentioned that the Kilo Flight was formed with three aeroplanes given by the Indian Air Force — one Chetak helicopter, one Otter airplane and one Dakota aircraft. It would soon become the Bangladesh Air Force.

These planes were to be flown by Bangladeshi pilots who had crossed over into our country in August 1971. But before they did that, they had to be trained on these machines which were vastly different from the ones they had flown in the Pakistan Air Force.

I spoke with Air Commodore C M Singla (retd), who was involved in training these pilots. Almost 50 years on, Singla Sir remembers the events from this special phase of his career as if it happened yesterday.

Flight Lieutenant C M Singla was posted as an instructor at the 112 Helicopter Unit located at Baghdogra (West Bengal) in September 1971.

Besides some regular flying to support the units in the area, the 112 HU was mainly entrusted with operational training of the rookie pilots who had arrived from the Helicopter Training School before they went on to be posted to fly in operational units.

The war clouds were hanging low and the 112 unit found itself on standby most of the time to undertake operational missions.

Amidst all this excitement, the CO of the unit, Squadron Leader Naresh Kumar (who later became air marshal) received a call wherein he was asked to send a qualified flying instructor (QFI) to Tezpur (Assam).

Flt Lt Singla was chosen for the task. There was no clarity as to what the mission was and for how much time he would be needed in Tezpur.

“I did not want to do a desk job, especially when war was imminent. I promptly went to the CO’s office and told him of my apprehensions. I had been recently posted in and wanted to garner as much instructional experience as possible — especially on the Chetak on which I had limited experience. All my protests fell on deaf years,” recalls the veteran.

“Pack your bags for four to five weeks and be ready to move by transport aircraft tomorrow morning,” his CO ordered.

A dejected Flt Lt Singla was ready at the tarmac at 8 am.

A Dakota aircraft ferried him to Tezpur, where he was received at the tarmac by the then CO of the 115 Helicopter Unit, Squadron Leader Mehtani, and taken to the office of the Air Officer Commanding.

“Have you flown a Chetak alone (single pilot)?” the boss asked him.

Without waiting for an answer, the AOC drawled, “‘Mama’ Mehtani has a chopper ready for you. Take it to Dimapur (Nagaland). Maintenance aspects will be taken care of there; not to worry on that count. All further questions that you have will be clarified at Dimapur. Carry on! And happy landings!” said the AOC, signalling the end of the meeting.

Happy that he was still on a flying mission, Flt Lt Singla went about preparing his maps, obtaining the radio frequencies, etc. Soon, he was airborne for Dimapur, which is just 130 km south-east of Tezpur as the crow flies.

“At the tarmac, I was received by a rickety old jeep. Throwing my luggage at the back, I sat down next to the driver. But the jeep refused to start!”

Cursing under his breath, hungry, tired and sweaty after a long day, Flt Lt Singla started his first day at Dimapur pushing the jeep and was soon shown to his ramshackle quarters in a room located in a dilapidated ATC building, very near to where his aircraft was parked.

Dimapur was a small unit of 15 men, commanded by a flight lieutenant. “Their role was to provide support to the air maintenance (supply drop missions) being carried out by the Dakota, which provided much-needed rations and wherewithal to the troops deployed in the forward areas of Nagaland.

“Living conditions were just about adequate; I had no complaints about the spicy and oily food and the semblance of a mattress on a rickety old bed that was provided!”

Things became clearer after Group Captain Chandan Singh, the station commander of Jorhat (Assam), landed at Dimapur in a Dakota the next day.

Chandan Singh briefed the young QFI. “You are to train three Bangladeshi pilots to fly this Chetak helicopter. Your task begins now. I want them to be fully operational as soon as possible. You will receive maintenance support to keep the helicopter flying.”

Ground training began the same day. “Little did I know then that this date would be nominated as the raising day of the BAF in a few months’ times,” smiles Singla Sir.

There wasn’t a moment of respite.

The Bangla pilots had only flown fixed-wing aircraft. To get used to hover and other nuances peculiar to the helicopter were difficult to imbibe at first.

A lot of fixed-wing habits, which they had developed over the years, had to be discarded. Besides, the pilots were not used to reducing their speed to almost zero while landing.

“Their very concept of flying itself had to undergo a change,” he says. “Their distressed state of mind and the barely acceptable living conditions made teaching and training them a formidable task.”

Day flying continued into the night and the pilots were soon comfortable handling the machine. Flt Lt Singla reported to Group Captain Chandan Singh that the training was well underway and the pilots were now ready to take on some operational tasks.

Singla Sir describes an event when he almost had a brush with death during the night navigation training.

One day, Group Captain Chandan Singh ordered, “For the night navigation phase, I want to see your helicopter over the Johrat ATC at midnight.”

“The sky was obscured with clouds and there was a chance of rain. Halfway through the navigation through the pitch darkness, the aircraft encountered intense clouds and had to descend,” recalls Singla Sir.

The Chetak is barely good enough for flying in good weather.

“Flying on instruments that night, I kept descending inadvertently to avoid the clouds and the rain that had started to pelt down in torrents. We could barely see what was ahead and there was no visual reference.

“Suddenly, we found ourselves almost brushing the trees, about to shave the tops of some of them with our rotors. That would have spelt doom for us.

“I pulled up and decided enough was enough. We set course back for Dimapur and landed back safely by the grace of God!”

Although Chandan Sir gave them a mouthful for not reaching Johrat, they were happy to be alive to fly another day.