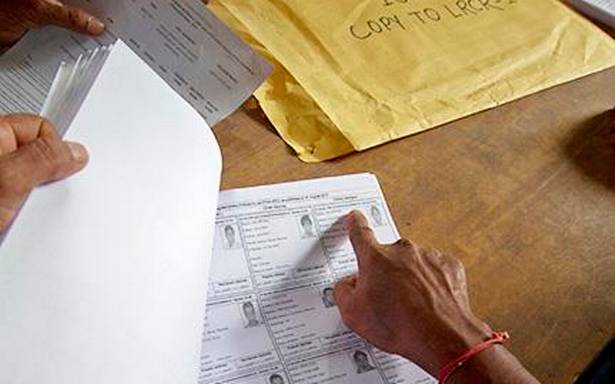 Aadhaar enrolment of 27.43 lakh people has been on hold with no signs of update exercise being taken forward soon

More than 19 lakh out of 3.3 crore applicants were left out of the complete draft of Assam’s National Register of Citizens (NRC) published on August 31, 2019.

But the stagnation of the updating exercise has cast a cloud of uncertainty over 8.37 lakh more people across the State. This is because the biometric details of 27,43,396 people collected before the publication of the draft continue to be frozen.

“The NRC process should have been taken to its logical conclusion or continued within the schedule. But the suspension of the exercise has denied documents such as Aadhaar card to many while thousands are being deprived of ration cards and other government benefits,” senior advocate Hafiz Rashid Ahmed Choudhury said.

The trauma for the excluded people is increasing with the time taken for the exercise to resume, he stated.

The Unique Identification Authority of India (UIDAI) had collected the biometric details of 27.43 lakh people who had been delisted from the initial complete draft published on December 31, 2018. Some 8.37 lakh of them made it to the NRC compete draft published eight months later.

The collection of biometrics followed a Supreme Court-approved standard operating procedure (SOP) in November 2018. Fingerprints, retina scan and other details were collected during the hearing of claims for the excluded people to be included in the NRC and objections to the inclusion of people who may have figured in the citizens’ list erroneously or through alleged manipulation.

These hearings were conducted from January 1 to a few weeks before the publication of the complete list.

There are several factors why the biometrics are frozen. The Registrar General of India (RGI) has not yet issued a notification on the NRC, which questions the legality of the list. The Supreme Court, which supervised the exercise from 2013, has not heard cases related to NRC since January 2020. And the BJP government in the State wants the NRC reverified for a “corrected” list.

In February 2020, NRC State Coordinator Hitesh Dev Goswami wrote to the Assam government advising the unlocking of the biometric details of the 8.37 lakh people who made it back to the list.

The State’s Home and Political Department said the Centre had accordingly been sounded.

Officials at the UIDAI’s regional office in Guwahati said the Aadhaar numbers of people with the “NRC cloud” could not be issued until a clarification from the RGI reached the authority via the Department.

According to the SOP, each excluded person was to have been issued a rejection slip for appealing to a Foreigner’s Tribunal within 120 days of receiving the slip. The tribunals would then hear their cases for inclusion in the register or exclusion for good.

Apart from those who were delisted for faulty or lack of proper documents, the excluded include the DF, DV and PFT – acronyms for “declared foreigner”, “doubtful voter” and “pending in Foreigners’ Tribunal”.

A majority of those excluded are Bengali-speaking Muslims and Hindus suspected to have come illegally from Bangladesh. About a lakh are ‘DV’ Gurkhas, who are expected to make it to the NRC automatically after the Assam government had through a recent notification exempted the community from cases in Foreigners’ Tribunals. Pending cases were also ordered to be withdrawn and the DV tag on community members in the electoral rolls was asked to be removed.

“The exclusion of NRC was supposed to be applicable only for the people who came to Assam after March 24, 1971, from the ‘specified territory’ mentioned in the Assam Accord of 1985. Gurkhas never belonged to the specified territory, so the cut-off timeline was not applicable for them,” Bharatiya Gorkha Parisangh leader Nanda Kirati Dewan told The Hindu.

‘If the notification is implemented timely in letter and spirits, Gurkhas excluded from the NRC due to DV and PFT tag will be included in the final register. But the community will believe the intent only after all the official formalities of the NRC process are done and the outcome is seen on the ground,” he said.