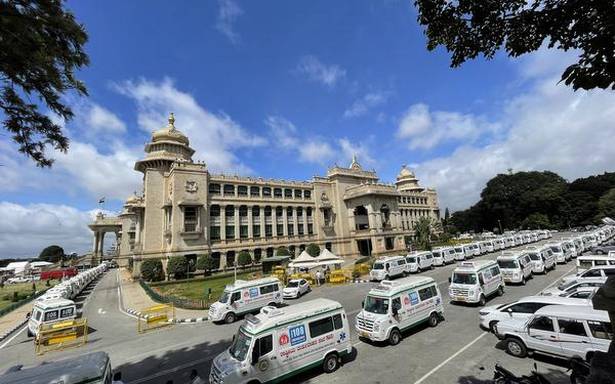 As many as 120 advance life support (ALS) ambulances have been added under the Arogya Kavacha — 108 service in Bengaluru. Chief Minister Basavaraj Bommai inaugurated the new ambulances on Sunday.

The Minister said ambulance service is an integral part of the healthcare delivery system and plays a vital role in saving lives during emergencies. “Our government is committed to expand its network and enhance quality of services,” he added.

According to a release, the Arogya Kavacha, which was introduced in 2008 by the then Chief Minister B.S. Yediyurappa and then Health Minister Sriramulu, will be given a facelift.

“If technologies like GPS, mobile app are adopted, then we can ensure that the ambulance reaches the patient within 10 to 15 minutes. The mapping of hospitals helps to identify the nearest available hospitals and also brings in transparency. Now it takes about 30 to 45 minutes for an ambulance to reach the patient in urban areas and in rural areas, it is even more. We are working to bring down the turnaround time to 10 to 15 minutes by using technology and also increasing the number of ambulances,” Dr. Sudhakar said.

At present, there is one ambulance for 1 lakh population and the government wants to increase it to make one for every 45,000 to 50,000 population, he said. “We also provide training to drivers and paramedical staff to make the service more people-friendly,” said the Minister.

The Health Minister also said the government is administering about 3.8 lakh doses of vaccine each day on an average, which is more than the number of doses administered in all of Russia. “We are a few lakhs short of completing 5 crore doses and we will soon reach this big milestone,” he added.