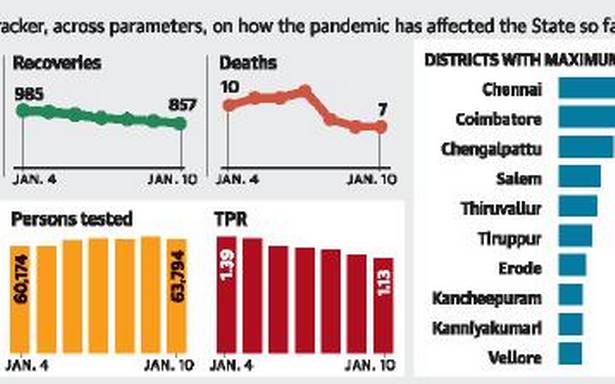 Twenty districts recorded under 10 COVID-19 cases in Tamil Nadu, while Perambalur saw none. The State recorded 724 fresh infections, eight of which were detected among incoming passengers.

These included four international passengers —two each from the U.A.E. and the U.S. Among domestic passengers, there were two from West Bengal and one each from Odisha and Bihar, who arrived by surface transport, health officials said.

As on date, 7,164 persons are undergoing treatment or are under isolation. The State’s tally touched 8,26,261.

On Sunday, 857 persons were discharged after treatment, taking the total figure to 8,06,875. The State also recorded seven deaths. All the deceased had co-morbidities.

Public health officials said of the approximately 2,300 passengers who travelled from the U.K., between November 25 and December 23, last year, 2,146 have been traced and tested. Of them, 24 tested positive for COVID-19. Details of the passengers include cross notification from/to other States. Tracing of other passengers is under way, officials said.

According to the daily health bulletin released by the Directorate of Public Health, 208 fresh infections and one death was recorded in Chennai district. A total of 240 persons were discharged after treatment. As many as 2,182 persons are currently undergoing treatment in the district.

Yet another person, whose death was recorded, had a history of pulmonary tuberculosis and was also suffering from chronic kidney disease.

The State added one more private testing facility in Tiruvallur, taking the total number of testing centres to 180.