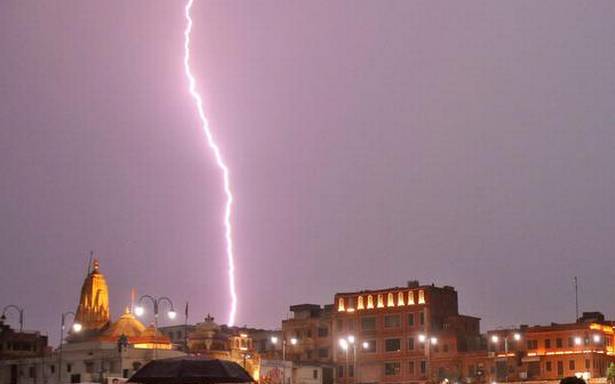 Eleven persons atop a watch tower near Amber Fort were among the killed.

Eleven persons perched on a watch tower near the Amber Fort in Jaipur amid the rains were among the 20 killed in incidents related to lightning strikes reported from various places across Rajasthan on Sunday.

Twenty-one persons, including six children, were also injured in the incidents which took place in Kota, Jhalawar, Baran and Dholpur districts, besides Jaipur.

A large number of people, including tourists and city residents, were present on the watch tower built on a hill at the ramparts of the historic Amber Fort, when the lightning struck during the first spell of monsoon rains in the evening. Many of them were injured as they jumped off the watch tower in panic.

Teams of the State Disaster Response Force rushed to the spot and sent the injured people lying unconscious to the Sawai Man Singh Government Hospital here. The police personnel also joined the search in the hilly terrain in the darkness to look for the injured and the dead.

Elsewhere in the State, four persons died on the spot in Kota’s Garda village after lightning struck a tree under which they had taken shelter with their cattle. Ten goats and a cow were also killed in the incident. A shepherd was killed in a similar incident in Jhalawar’s Lalgaon village and one person died in Baran’s Bahroi village.

Three children were killed after the lightning struck them in Dholpur district’s Kudinna village.

Chief Minister Ashok Gehlot expressed grief over the deaths and announced an ex gratia of ₹5 lakh each to the next of kin of the deceased.

Prime Minister Narendra Modi also condoled the deaths in a tweet: “I am deeply saddened by the loss of lives in the incidents of lightning in some areas of Rajasthan.”