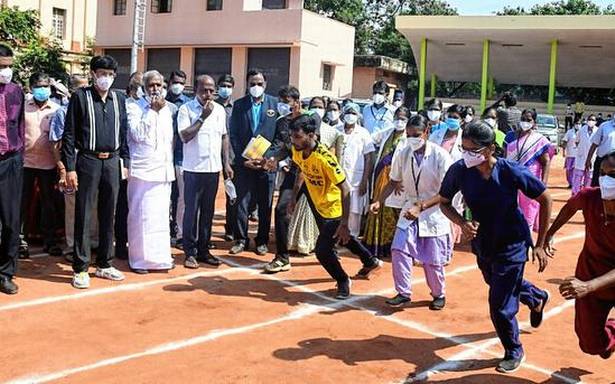 Since January, 2,090 people in Tamil Nadu have been affected by dengue, Minister for Medical and Family Welfare Ma. Subramanian said on Thursday.

At the inauguration of a renovated playground at the Madras Medical College, the Minister said the Greater Chennai Corporation was taking measures to control mosquito breeding by deploying drones to spray larvicide on waterbodies, while government hospitals were providing proper treatment for dengue.

He said they were scheduled to meet the Union Health Minister on July 9. Following the Cabinet reshuffle, he said they would try to confirm the meeting with the new Union Health Minister to discuss issues, including the admission of students to the upcoming All- India Institute of Medical Sciences in Madurai. If not, the Health Secretary would visit Delhi as per the existing plan and meet officials, including the Union Health Secretary and the Joint Secretary, he said.

The Minister said 1,59,26,050 doses of COVID-19 vaccines had been supplied by the Union government to the State. Vaccines have been distributed to districts with higher demand and those with high positivity rates.

The next supply of vaccines was scheduled to arrive on July 11, he said.

The Health Secretary would talk about the requirement of vaccines during his visit to Delhi, he added.

As many as 55,052 COVID-19 patients have been treated at the Rajiv Gandhi Government General Hospital so far. The hospital has the capacity to treat 2,600 patients. A month ago, when cases rose rapidly, no bed was available at the hospital, while presently, only 115 people were undergoing treatment here, the Minister said.

The playground at the Madras Medical College was given a facelift at a cost of ₹25 lakh.