The Opposition leaders also requested that the verification of VVPAT slips of five randomly identified polling stations per Assembly constituency should be done before the counting of votes and not after the completion of last round. 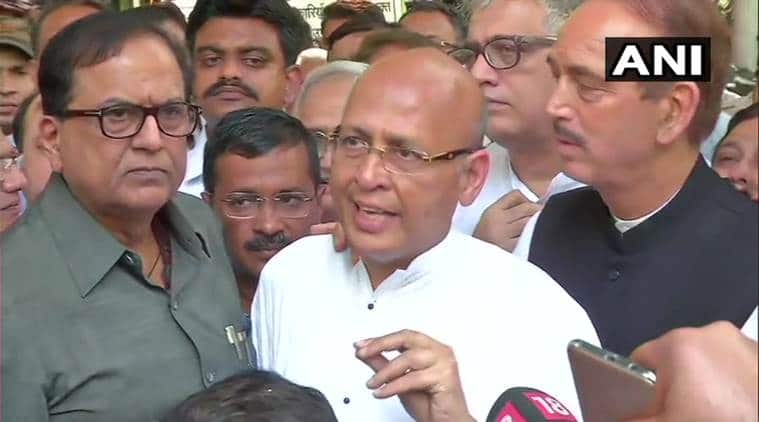 Leaders from 22 Opposition parties submitted a memorandum to the Election Commission seeking 100 per cent matching of Voter Verifiable Paper Audit Trail (VVPAT) slips with EVMs of all polling booths of an assembly segment in case of a discrepancy.

In the meeting with the Election Commission, that lasted about an hour, the Opposition leaders also requested that the verification of VVPAT slips of five randomly identified polling stations per Assembly constituency should be done before the counting of votes and not after the completion of last round, according to ANI.

“We told the EC that the VVPAT machines should be counted first and if there is any discrepancy, then all of them in that segment should be counted,” Congress leader Ghulam Nabi Azad told reporters here after meeting EC officials.

Another Congress leader, Abhishek Manu Singhvi, said despite requests to the EC for the last three months, the poll body said it would meet on Wednesday to discuss the issue.

“We raised these same issues in last one-and-a-half months. We asked Election Commission why have they not responded. Strangely, EC heard us for almost an hour and assured us they will meet us again tomorrow,” ANI quoted Singhvi as saying.

Among other leaders who attended the meeting were Congress’ Ahmed Patel, Ghulam Nabi Azad, Ashok Gehlot, BSP’s Satish Chandra Misra, Sitaram Yechury of the CPI(M), D Raja of the CPI, Delhi Chief Minister and AAP convenor Arvind Kejriwal, Derek O’Brien of the TMC, Ramgopal Yadav of the SP and Kanimozhi of the DMK.

The Opposition meeting came on a day the Supreme Court dismissed a PIL by a Chennai-based organisation ‘Tech 4 All’, seeking 100 per cent matching of VVPAT slips with EVMs during the counting of votes on May 23.

“The CJI had dealt with this matter. Why are you taking chance before a two-judge vacation bench. We will not list any such case for urgent hearing. We cannot override the CJI’s order…This is nonsense,”said a vacation bench comprising justices Arun Mishra and M R Shah.

A three-judge bench, headed by CJI Ranjan Gogoi, on May 7 had dismissed a review plea filed by 21 opposition leaders seeking that random matching of VVPAT slips with EVMs be increased to 50 per cent.

Prior to this, the top court had on April 8 directed the Election Commission to increase random matching of VVPAT slips with EVMs from one to five polling booths per assembly segment in Lok Sabha polls.