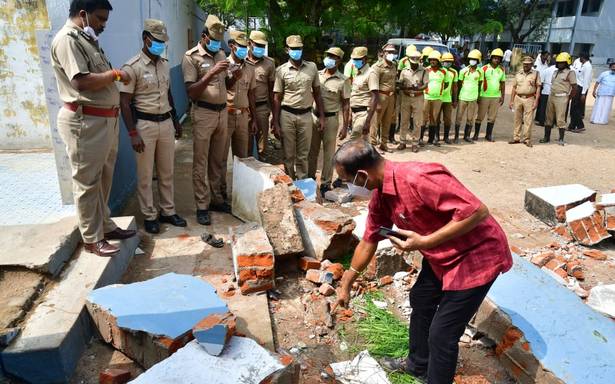 Three students were crushed to death and three others injured when a wall constructed precariously near the toilets of a government-aided school on S.N. High Road in Tirunelveli collapsed on Friday morning.

When the students of the 143-year-old Schaffter Higher Secondary School, administered by Tirunelveli CSI Diocese, near Tirunelveli Corporation Office, went to the toilet during the interval at 11 a.m., one of the three ‘covering walls’ [to prevent view from outside], measuring about 6 feet X 5 feet, collapsed and fell on a few students causing serious injuries to them. The walls were built at the entrance of the urinals.

While D. Vishwa Ranjan, from Ramaiyanpatti and K. Anbazhagan, both class 9 students, died on the spot, four others were rushed to the Tirunelveli Medical College Hospital, where R. Suthish, a Class 6 student, succumbed to his injuries.

“The condition of the other three students is stable,” a TVMCH doctor said.

Students of the school blocked the vehicular traffic along the busy S.N. High Road for a while following the tragic incident. Even as the police were pacifying them, a few students smashed the windscreen of an autorickshaw that was crossing the protest point. They also damaged the ornamental plants on the school premises and raised slogans against the school administration, demanding the arrest of those responsible for the [poor construction that led to the] collapse.

District Collector V. Vishnu, who was chairing the fishermen’s grievances redressal meeting at Radhapuram, situated about 65 Km from the district headquarters, rushed to the accident spot and met the injured students at TVMCH.

Officials who inspected the mishap site opined that the collapsed ‘covering wall’ did not have proper foundation.

“Since the wall has not been built on a properly laid foundation, the recent downpour might have weakened the wall further. Unfortunately, it has claimed the life of three students,” a senior revenue official said after visiting the spot.

Chief Educational Officer Subhashini has been asked to conduct an inquiry and submit a report to the Department of School Education. The school administration declared holiday for the school on Friday.