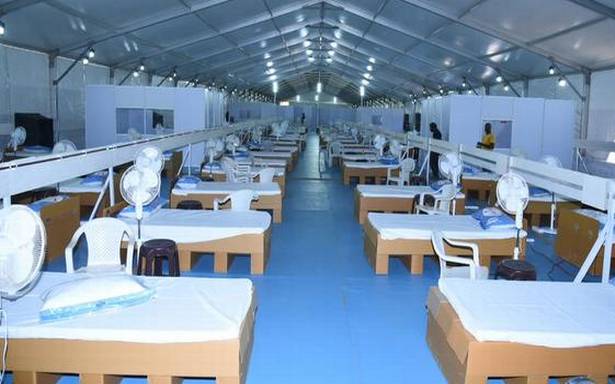 A makeshift COVID facility with 300 beds in the open ground next to the Super Speciality Hospital was inaugurated in virtual mode by Municipal Administration Minister Botcha Satyanarayana here on Tuesday.

At least 158 new medical and para-medical staff, including 36 doctors, were recruited for the facility. There are seven nursing and seven doctors’ stations (chambers) for different wings of the large tent. Two 125-KV generators have been installed for continuous power supply and 54 make-shift toilets have been set up.

Work on the German hanger, set up in an acre, was started in the second week of May when the number of COVID cases was at its peak. Mr. Botcha Satyanarayana, who is also district in-charge Minister, congratulated District Collector Gandham Chandrudu and his team on getting the work completed on an immediate basis.

Hindupur MP Gorantla Madhav said the facility would be immensely helpful in meeting the demand for hospital beds should a need rise again. Though there are only a handful of patients now, the tent is seen as a preparatory infrastructure for a possible third wave.