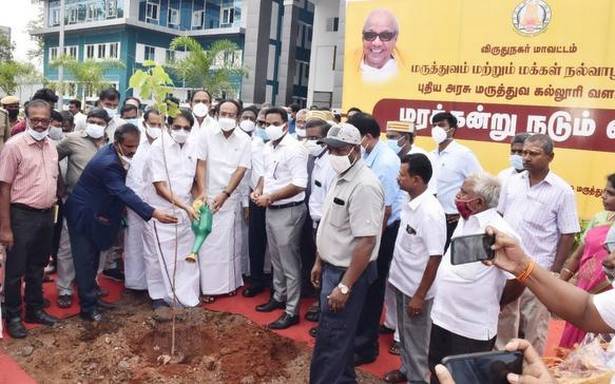 As part of the greening programme on the college premises, Ramco Group has taken initiative to plant 3,000 saplings on the 25-acre premises where various buildings for the medical college and hostels have come up.

Along with Collector J. Meghanath Reddy, the Ministers inspected various facilities provided at the college. National Medical Commission has approved for admitting 150 students to the MBBS course for the current academic year.

“All the buildings, except for auditorium is ready. We expect that the buildings would be handed over to us very soon,” Dean, J. Sangumani, said.

“The trees that are suitable to the climatic and soil condition of Virudhunagar have been chosen to provide greenery on the college premises,” the Dean said.

Another 3,000 saplings would be planted in the coming days.