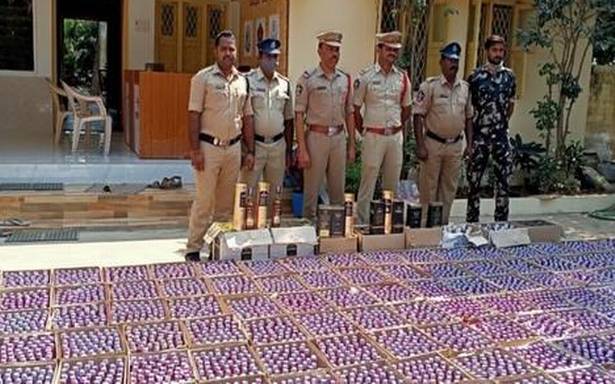 In a joint operation, the Special Enforcement Bureau (SEB), Excise and Law and Order police conducted raids across the State and seized over 30,000 liquor bottles, worth ₹14.5 lakh, being transported to villages in a bid to woo voters during the second phase of polling.

West Godavari Superintendent of Police (SP) K. Narayan Naik said the police intercepted a tractor at Lingagudem border checkpost and seized 9,696 bottles of Non-Duty Paid Liquor (NDPL), worth ₹12 lakh, being transported from Telangana State. Two smugglers, along with the vehicle and the stocks have been seized, said SEB ASP C. Jayarama Raju.

In another case, the Mudinepalli police led by Gudivada DSP N. Satyanandam seized a tipper, one car and two bikes, for transporting 2,020 NDPL on Saturday. The stocks were valued about ₹2.75 lakh, said Krishna district SP M. Ravindranath Babu.

The Vissannapeta police chased a car at Vemireddypalli border checkpost and recovered 635 liquor bottles, being smuggled from the neighbouring Telangana State, said Nuzvid DSP B. Srinivasulu. One person was arrested and a case has been registered, the DSP said.

Police seized over 14,000 liquor bottles at Chilakaluripet and Piduguralla in Guntur district, and seized two four-wheelers. The SEB police seized about 51,000 litres of ID liquor at different places and the raids will continue, said the SEB Commissioner.

Director General of Police (DGP) D. Gautam Sawang on Saturday praised the police for extending good services to the aged, pregnant women and the special need persons at the polling centres.

Mr. Sawang also appreciated the police for doing good enforcement during the second phase of local body elections, in which liquor and other freebies, have been seized across the State.

“More than 47,000 personnel, including CRPF and APSP contingents have been deputed for the second phase of gram panchayat polling in Andhra Pradesh. Compared to the 2013 local body polls, the number of cases and violence was less now, and the polling percentage during the first and second phase cross 81% in the State,” the DGP said.