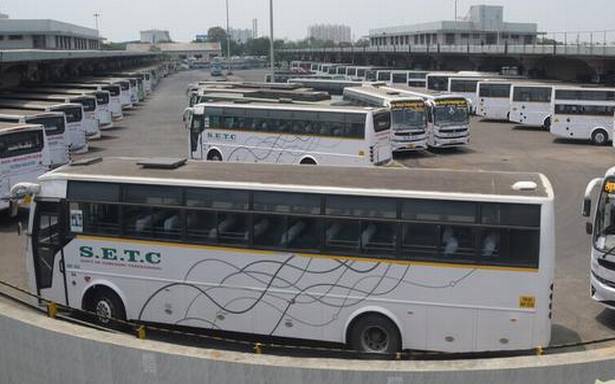 10,228 buses to various destinations from Chennai between January 11 to 13

The Transport Department will run more than 10,250 buses from the city to various parts of the State from January 11 to 13 for Pongal festival. About 31,500 buses are to be operated throughout the State to cater to the festival rush.

A meeting chaired by Transport Minister M.R. Vijayabaskar in the Secretariat on Friday along with Transport Secretary C. Samayamoorthy decided to operate 16,221 buses, including special buses. While 10,228 buses would be operated from the city to other parts of the State, 5,993 buses would be deployed between various destinations in the State.

According to a press release, the department will run 4,078 special buses in addition to the 6,150 regular bus services from the city from five bus termini through the State Transport Corporations (STCs), including the State Express Transport Corporation (SETC). The long-distance buses would be operated from five bus termini located at Madhavaram, K.K. Nagar, Tambaram Arignar Anna bus terminus of MEPZ, Poonamallee and Dr. MGR bus terminus at Koyambedu.

A senior official said the number of buses deployed for Pongal was up by 100 compared to 16,112 operated last year from the city.

The Transport department has planned to run more than 9,500 buses for the commuters to return to the city and 5,727 buses between other parts of the State after the Pongal festival is over. The buses, including special buses, would be operated from January 17 to 19.

The Transport department has opened 13 special advance booking counters in Koyambedu, Tambaram MEPZ and Poonamallee. Also a round-the-clock control room for helping passengers in Koyambedu and mobile complaint bearing 9445014450 and 9445014436, have been opened.