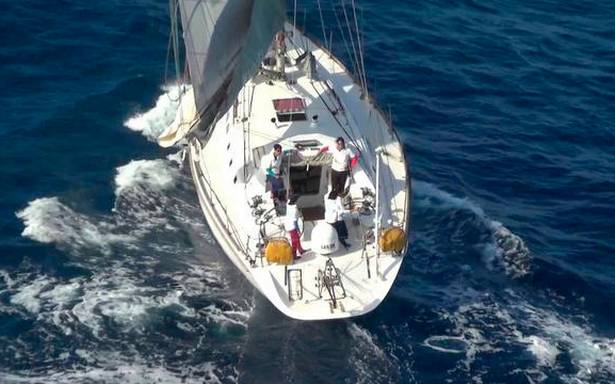 In the group are members of an all-women team that circumnavigated the globe in one such vessel in 2017 and have fixed their eyes on doing it solo in a year’s time.

Powered by wind, they intend to cover the distance in fewer than five days. The regatta, under the aegis of the Indian Naval Sailing Association (INSA), is aimed at fostering adventure and ocean sailing.

Among the eight women are Lt. Cdr. Varthika Joshi and Lt. Cdr. Dilna Devadas, a native of Kozhikode, who will navigate sailing vessels, 40 ft and 56 ft long, in the regatta. “The women in each vessel will have to partake in all tasks that men do, including hoisting of sails and repairing electrical parts or the engine, if need arose,” says Lt Cdr Dilna.

The vessels were made in India, at yards in Goa and Puducherry. Their engines will be switched on only for emergency.

Another participant Cdr. Deepak Raj spoke of how he has so far covered over 15,000 km in sailing vessels, including a Cape Town-Rio-Kochi journey in 2016. “Circumnavigating the globe solo will be a challenging task, what with the participant not having any human contact for about eight months.”

Indian Navy’s guard ships and aircraft will patrol the seas to ensure that there is no threat of harm by pirates, says his colleague Cdr. K.R. Binoy.

“The personnel, two of whom represented the country in sailing events in Asian Games, will brave the elements, especially the wind and the currents. Having to cook one’s food, each participant will have to do multiple tasks. This will make the regatta a platform to identify trainers,” he says.

Rear Admiral T.V.N. Prasanna, Command Staff Officer (Training) of the SNC, and Captain Manish Sain of the INSA were among those who interacted with the navigators on Saturday.