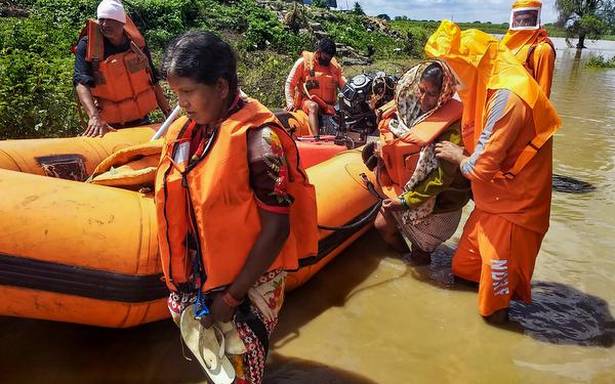 Uddhav Thackeray urges farmers in Marathwada not to despair, assures students of re-test for CET

As many as 436 persons have lost their lives owing to rain-related accidents, floods and inclement weather this year while 17 lakh hectares of cropland have been ravaged thus far owing to the extremely heavy rainfall aggravated by cyclonic storms, said the Maharashtra government on Wednesday.

Of the deceased, a majority — around 250 persons — lost their lives in landslips and floods when heavy showers badly hit western Maharashtra and the Konkan region in August. 71 persons died in September alone, sid Relief and Rehabilitation Minister Vijay Wadettiwar while 196 persons died due to lightning.

The follow-on effects of Cyclone Gulab continued to be witnessed in the Marathwada region, with relentless showers pummelling Osmanabad, Aurangabad, Parbhani, Latur and Nanded districts among other places where more than 15 persons are said to have lost their lives till now.

“Besides humans, several livestock have been swept away by the floodwaters while seven districts in Marathwada have received an average rainfall of 170 mm to 190 mm in the monsoon season. In Osmanabad, civilians had to be evacuated by helicopter and boat. So far, the government has completed 81% of the panchnama [damage assessment] procedures of the cropland [17 lakh] destroyed this year owing to multiple floods and rain incidents,” Mr. Wadettiwar said, adding that the area of cropland destroyed could well rise to 22 lakh hectares after the present bout of showers subsided.

Reviewing the situation, Chief Minister Uddhav Thackeray urged farmers not to despair in the face of this unprecedented calamity, while assuring students who could not reach exam centres for the State common entrance test (CET) exam a re-test. He directed the administration to extend all possible help to the affected farmers and citizens.

Several students in the rain-hit Aurangabad could not make to their respective exam centres as floodwaters disrupted daily commute.

Higher and Technical Education Minister Uday Samant said no student would be deprived of taking the CET again.

The Chief Minister held discussions with the Divisional Commissioners on the flood situation and said the administration should pay close attention to the rescue and relief efforts and that the Revenue And Agriculture Departments must immediately start damage assessment.

“The rains have washed away fruit orchards and crops in several Marathwada districts. This is an unprecedented situation,” Mr. Thackeray said.

He expressed satisfaction over the rescue of about 100 people from Osmanabad, Latur, Aurangabad and Yavatmal areas by the NDRF personnel and the local police. He said one team of the NDRF is in Osmanabad and one in Latur and an Air Force helicopter is conducting rescue operations in the two districts.

In Osmanabad, all sluice gates of the Manjara dam have to be opened due to continuous showers over the last 72 hours. Dams in most districts in Marathwada have filled to capacity.