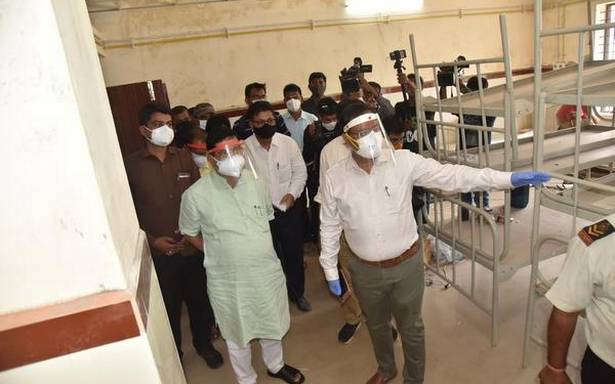 On Monday, Union Minister for Parliamentary Affairs, Coal and Mines Pralhad Joshi inspected the progress of work at Mother and Child Hospital which is under construction on Karnataka Institute of Medical Sciences (KIMS) premises in Hubballi.

The hospital is being built at a cost of ₹20 crore and already, oxygen supply pipelines have been got ready for the wards in the basement, ground and first floors of the hospital. And, it has been planned to make the hospital available for emergency use for COVID-19 patients by providing fire and safety measures, electricity and water supply.

After going around the hospital, the Minister asked the contractor to complete the work on basic amenities by May 1 and make the hospital available for emergency use.

Later, speaking to presspersons, Mr. Joshi said that hospitals in Hubballi and Dharwad were sanctioned under National Urban Health Scheme in 2017. “While the hospital on KIMS premises is being constructed at a cost of ₹20 crore, a similar hospital will come up in Dharwad at a cost of ₹26 crore. The Dharwad district administration has taken steps to set up a temporary COVID-19 hospital,” he said.

On the availability of medical oxygen, the Minister said that the Union government has allocated 802 tonnes of medical oxygen and steps have been taken for its supply. “Of this allocation, around 90% is produced within the State and supplied. The State government has requested for supply of the remaining allocation from within the State. The Centre is extending all necessary cooperation and supplied 1.22 lakh vials of Remedisvir injection,” he said.

To a query, Mr. Joshi said that funds have been released from PM Cares Fund for setting up oxygen plants and the State governments should take interest in getting the plants established at the earliest. Oxygen plants could be set up within a month and once commissioned, these plans would be able to provide oxygen support to 60 patients, he said.

The Union Minister said that there was nothing wrong in paying for vaccine by those who could afford it. He said that already, the Union government has given free vaccine to COVID warriors, frontline workers, senior citizens and those aged above 45 years with co-morbidities. The remaining inoculation drive would be conducted by the State government in partnership with the Union government, he said.

The Union Minister also appealed to the people to adhere to the COVID-19 protocol as the mutant virus was spreading at a fast pace. The Union government would distribute foodgrains to the needy for two months and people should impose self-curfew to save their own lives, he said.

Subsequently, Mr. Joshi, along with his wife Jyothi, took the second dose of Covishield vaccine and appealed to people to get themselves inoculated.