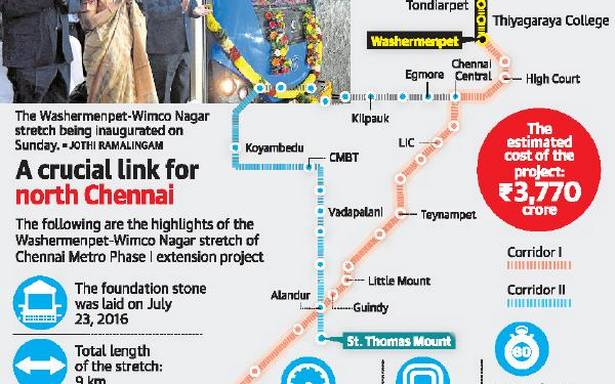 As the first service of Metro train started from Washermenpet to Wimco Nagar on Sunday, several excited commuters entered the trains to take the journey they have been waiting for the past five years.

Behind the 9-km Washermenpet-Wimco Nagar stretch is a story of struggle, say activists in north Chennai. “It was not in the original plan. We conducted human chains, protests, hunger strikes and met several politicians to remind them that these areas required a good mass transport system. We are thrilled to take the train today,” said Ernest Paul of North Chennai People’s Rights Federation. The foundation stone for the Metro phase-I extension line was laid five years ago. Federation co-convener T. Rajkumar said the areas along the stretch are home to working class and business communities. “Many residents are traders who travel to areas like Koyambedu. Similarly, people working in educational institutions, government and private companies will be keen on travelling by it,” he says.

S. Mala, a resident of Tollgate, regularly commutes from Wimco Nagar to the city. She stepped into the Metro for the first time with her friends, looking visibly happy. “We would love to travel daily. But we still do not know what the fares are and we can travel only if we can afford it,” she says. The trains ran packed on Sunday as Metro offered free ride after 2 p.m.The real patronage will be known after some days as the fares are as high as ₹70.