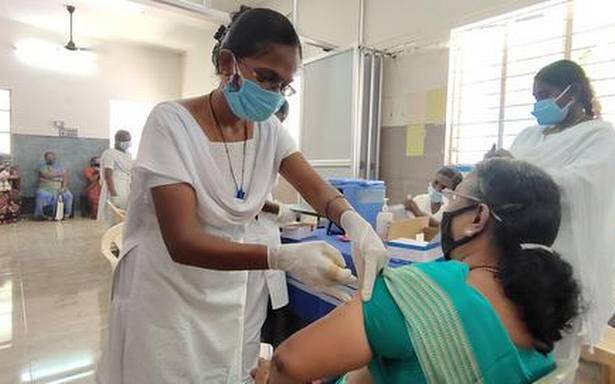 About 60% of the 300 people whose blood samples were collected during the serosurvey undertaken in the city have developed antibodies against COVID-19, officials of the Tiruchi City Corporation told The Hindu.

To study the incidence of the infection, the Directorate of Public Health (DPH) had identified eight locations in the city. They earmarked hotspots and informed the local health officials, who drew blood samples to test for antibodies for COVID-19.

City Health Officer M. Yazhini said that 30 samples were taken from each location. So, 30 samples of 30 different individuals in 30 adjacent houses were taken in each locality. Residents who were unwilling to take part or unavailable were left out, she said.

The results were sent to a laboratory of the DPH in Manapparai, and the results, which were published on Monday evening, indicated that 60% of the population surveyed had developed antibodies, either by infection or by vaccination.

The results in some of the individual areas were much higher. In Duraisamipuram, 83.33% had developed antibodies, in Mela Eda street 76,7%, in Kalaivanar street 60%, in Bharathisadan 5th street 70%, in Durgaiamman Kovil street 53.33%, in Rajam street 70%, on Sangiliandapuram main road 63.3% and in Rayar Thoppu 83.3%.

As per experts, the result of the serological survey has to be about 50-60%, to indicate herd immunity. Herd immunity is a form of protection from an infection that can occur when over half of a population is immune to it, either through vaccination or from getting infected.

“Our results are well above 50%. This means that come the third wave, a large part of the city will be safe. If the pace of the vaccination drives continues, more people can be saved,” Dr. Yazhini said.