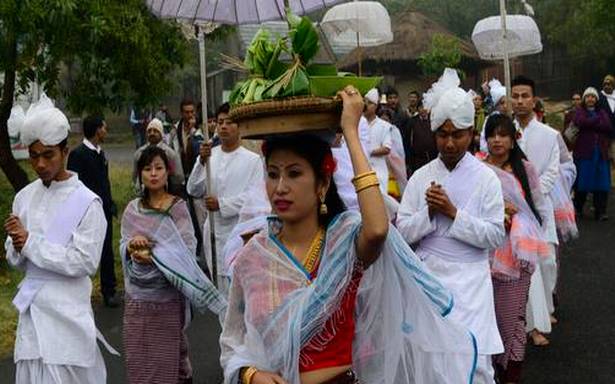 The World Meitei Council is protesting against the alleged negligence of the non-tribal Meiteis by the BJP- led coalition Government.

Normal life in the valley districts of Manipur was affected by the 72-hour general strike called by the World Meitei Council protesting against the alleged negligence of the non-tribal Meiteis by the BJP- led coalition Government.

Movement of all non-essential vehicles is not allowed along the national highways which are being patrolled by police teams. There is no report of untoward incident.

Normal life in the hill districts had been thrown out of gear since Friday midnight as a result of the “indefinite economic blockade” called by the All Tribal Students’ Union Manipur and other federation students and civil organisations of the tribals. They are protesting against the refusal of the State Government to recommend the Autonomous District Council Bill, 2021.

Manipur Chief Minister N. Biren said that it was not “indefinite economic blockade. There are some blockades in some pockets of the hill areas. Many groups do not support the strike and all chairmen of ADCs had announced that they are not connected with the strike in any manner. We are bringing the stranded commercial vehicles under armed escort”. He says that this matter should be tackled by the Parliament and not the State Assembly.

However, the tribal students do not agree with this view. Former Minister Okram Joy says that the Hill Areas Committee has no authority to support the Bill and the Assembly secretary has no power to recommend it to the Government.

The World Meitei Council has been launching various types of agitations demanding the recommendation to the Centre to include the Meiteis in the scheduled tribe list. But the majority community had been declared as general category. They had absorbed Vaishnavism in the 18th century.

However tribal students oppose the demand. The supporters say that the move is not against the tribals who enjoy reservations in appointments, promotions and all other sectors.