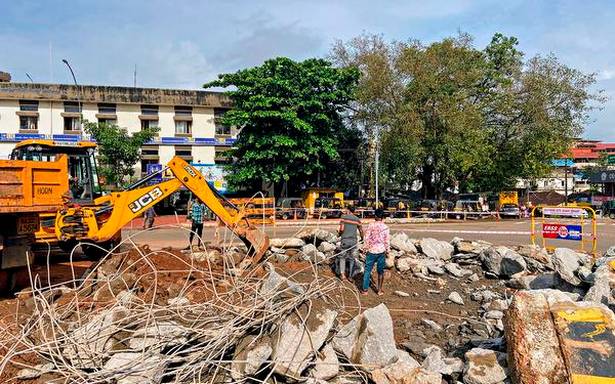 MSCL has already razed road medians along the stretch

The iconic A.B. Shetty Circle, named after the erstwhile Vijaya Bank’s founding chairman Attavara Balakrishna Shetty, was razed to the ground on Wednesday.

The circle located at the junction of Maidan Road and Mangaladevi Road in the Central Business district was renovated in 2011 by Vijaya Bank and further beautified in 2016 by the same bank.

Removal of the circle is a part of creating a circular one-way traffic from Clock Tower to Clock Tower on Maidan Road via A.B. Shetty Circle, Hamilton Circle and Rao and Rao Circle as proposed by Mangalore Smart City Ltd. (MSCL). MSCL has already razed road medians along the stretch to pave way for the one-way traffic.

Surendra Hegde, who was Vijaya Bank’s Regional Manager in Mangaluru in 2016 when the circle was further beautified, said he was pained to hear the news. With Vijaya Bank getting merged with Bank of Baroda, there appeared none to take care of the structure, he said. Mr. Hegde said the bank undertook renovation of the circle in memory of its founding chairman. The then chairman wanted the damaged circle repaired to keep the banking spirit of the region alive and accordingly, the damaged structure was repaired, lights were installed and sprinkler was provided for watering the lawn, he said.

Social activist G. Hanumanth Kamath expressed regret over the razing of the circle and said the city has lost one of its prominent landmarks. The authorities concerned were implementing the one-way traffic system without consulting the general public. Even the Mangaluru City Corporation did not come to any conclusive decision on the proposal, he said.

Quoting a senior MSCL official who reportedly told him that the one-way traffic was being implemented on trial basis, Mr. Kamath questioned the need for razing road medians and the circle for the trial of a new system. The roads were wide enough and there were no traffic jams in the locality, he told The Hindu.