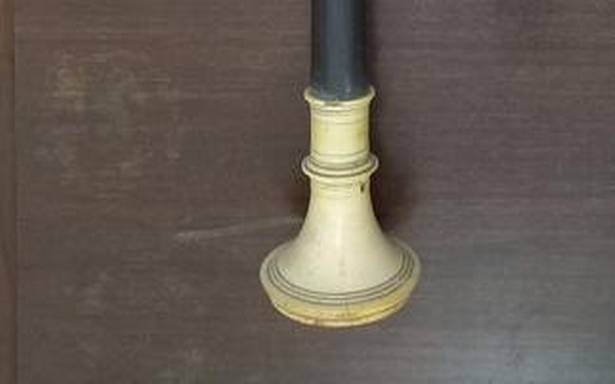 Chitrai Nayakar, the instrument’s original owner, is said to have played it at the wedding of the famed poet Subramania Bharathi.

It is still in good condition and Chitrai Nayakar, a nagaswaram player and owner of the instrument, is said to have played it at the wedding of national poet Subramania Bharathi.

“Chitrai Nayakar was my grandfather, and the instrument was gifted to me by my mother Meenakshi in 1962 when I got married. My grandfather had told my mother that he played at the wedding of Bharathiyar,” said advocate Ramani Natarajan, who now preserves the instrument.

It is a small timiri-type nagaswaram, capable of producing high pitch music. The lower part — anusu — and upper part of the instrument are made of ivory, and such instruments were normally possessed by musicians of great talent and fame. Chitrai Nayakar died in 1925.

“My mother told me that the instrument was decorated with gold filigree patterns, but they were lost after his death,” Ms. Natarajan said.

According to A.N. Sattanathan, the first chairman of the Tamil Nadu Backward Classes Commission, the instrument was gifted to Chitrai Nayakar by the Maharaja of Mysore, probably by Krishnaraja Wodeyar IV.

The late Sattanathan was the father of Ms. Natarajan; his father Arumuga Nayakar was also a nagaswaram player. Sattanathan has written in detail about his father and father-in-law Chitrai Nayakar in his autobiography, Plain Speaking: A Sudra’s Story.

The book offers rare insights into the world of exponents of the nagaswaram other than the Isai Vellalas of the composite Thanjavur district. Both Chitrai Nayakar and Arumuga Nayakar belong to the Padayachi community in Tirunelveli district. Besides Padyachis, Kambars, Dalits and Sunnambu Paravar communities also play nagaswaram and thavil.

In his book, Sattanathan records that Chitrai Nayakar, a native of Sundarapandiapuram in Tirunelveli, was the most successful person among those practising music as a profession in the district.

“He rose, in his day, to considerable fame as a nagaswaram virtuoso. He performed by invitation as far afield as the durbar of the Maharaja of Mysore and the Murugan temple at Kathirgamam in Sri Lanka,” Sattanathan wrote.

Chitrai Nayakar’s fame is explained by the fact that his annual income was ₹2,000, when the average annual income of professional musicians in those days was hardly ₹700. “Steadily his income rose and was between ₹3,000 and ₹4,000 for nearly 12 years before the inevitable decline set in,” Sattanathan said in his book.