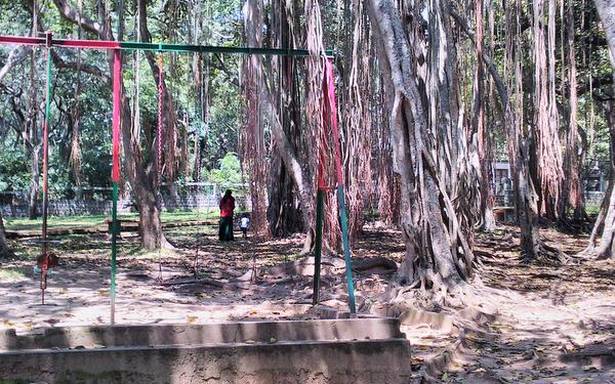 It is a case where a tree is a park. The huge banyan tree close to the Marayur Sandalwood Divisional office symbolises the symbiosis between man and animal.

During the day, families from nearby places are seen resting on the benches under the tree with their children swinging and playing there. The large area under the banyan tree was developed by the Forest Department into a public park with a small outlet nearby that sells snacks, drinks and eco products.

As the night sets in, the park turns into an area of cacophony. Simians occupy the branches of the tree after their day jaunt to the forest nearby in search of food.

The practise of the primates to return in the evening to the tree is a routine being followed much before it became a public park.

According to Marayur range officer M.G. Vinod Kumar, the tree’s branches provide a safe shelter to the monkeys. Their daily march for food to the practise they had continued for years, he said.

The banyan tree is believed to be over 500 years old. It is a symbol of a large number of banyan trees that once existed in the area, according to the older generation. The branches spread out wide and tender roots developed from the branches to find support in the earth, providing a beautiful ambiance.

Now, except this banyan tree, there is no other plant inside the park, where there are equipment for children’s play and resting places to spend a peaceful evening. This is till the simians return at dark, after which it turns into their night shelter.