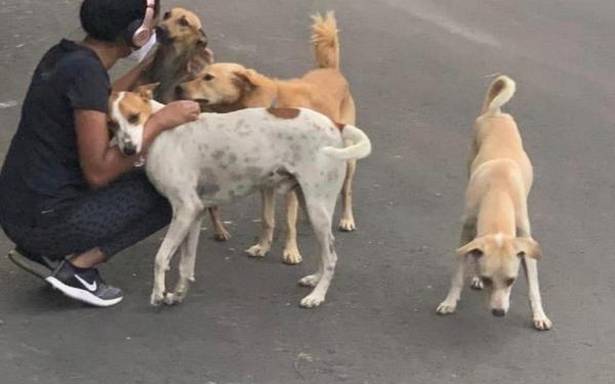 Every afternoon, around 2.30 p.m., residents take turns to feed the 15 dogs that have made the locality their home. The practice started in June last year has continued to this day.

It began when Elangovan, a resident of Jains Sagarika who was feeding the strays, left the country on work.

“The thought of the strays starving worried him, and he shared it with a few of us,” says Priya Ramkumar, a resident of the same apartment complex.

“Feeding all the strays every day seemed like a lot of work, and so I could not readily offer to help out. Later, my friend Indira at Lords and I decided to take turns to feed the dogs,” says Priya.

In fact, they decided to bring more ‘chefs’ on board, and posted a message in the WhatsApp groups of all three communities.

“Within 10 days, six people joined the stray-feeding initiative,” says Priya, who feeds the canines on Saturdays.

On Mondays, Indira Pujara feeds them chicken. Thanks to Amritha Dinesh, it is chicken and rice every Friday. By feeding the strays, Amritha is filling a void left by two pets she lost in quick succession.

Every Wednesday, Deepa Vittal prepares the food for the dogs before the humans in the family can have a whiff of theirs. It is chicken mixed with rice and dal. When one of the puppies had taken ill, she prepared chicken soup to boost its immunity.

Priya Ramkumar, a vegetarian, keeps the emphasis on nutrition.

Sample this. “Pedigree goes with chicken gravy that is mixed with boiled moong dal and eight cups of cooked rice. Sometimes, the preparation is peppered with carrot gratings,” says Priya.

There are volunteer-chefs on standby. “When a resident tested COVID-positive, one of us chipped in,” says Priya.

These resident-volunteers has give the strays names that they think best suit their nature — so you have Sam, Tiny, Timmy, Bheema, Daisy, Bhageera, Lady and Dori, to name a few.

“There have been concerned inquiries in the WhatsApp groups when one stray did not turn up,” says Indira.

Feeding of strays is a contentious issue in most neighbourhoods, how do residents tackle this?

GS Madhusudan, member of the management board of TANAVAS and a resident of the locality, says, “If you keep the dog neutered, well-fed and offer them shelter they will do no harm.”