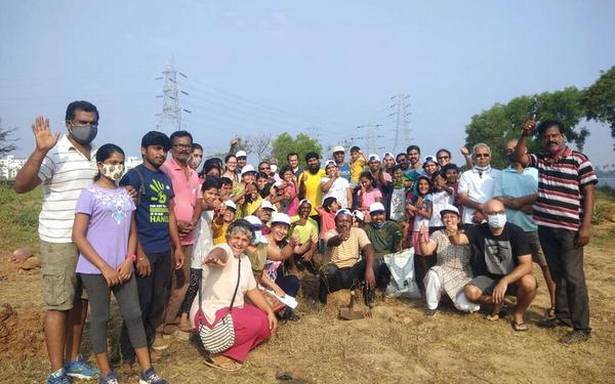 Here is the other one: The lake is a living organism that sustains the local community — the resident groups primarily among them — and should in turn be sustained by it. In an allied thought, the neighbourhood lake ought to be a source of learning about wetland ecology for the schools in its vicinity.

There are signs that this philosophy is at work. Two residents’ associations — Arihant Heirloom Flat Owners Association and Adroit District Apartment Association — and a residents-driven environment collective, Thalambur Green Group, have thrown themselves into Thalambur lake-protection initiatives.

Besides, another neighbour, The School run the Krishnamurti Foundation of India (KFI) is expected to be in the forefront of an education project around the lake, which would involve at least six other schools in the region.

From Thalambur Main Road, the most conspicuous feature of the lake area are two thatched structures with colourfully painted walls standing on a patch studded with painted boulders, tall steel boards and erect stone slabs bearing artwork of animals.

The steel boards let visitors know who they are likely to run into. They carry pictorial checklists of the trees, the plants and the birds that “reside” at the lake.

“The huts were made only for children to congregate and engage in onsite experiments. It is a living lab for students. We have actually put together a curriculum,” begins Jayashree Vencatesan, managing trustee, Care Earth, which carried out the restoration of the lake, a project initiated and sponsored by Hunduja Leyland Finance as part of its CSR initiative.

“Before the pandemic, when the schools were open, KFI’s The School was bringing its children for wetland ecology sessions. Our idea was to work with KFI and other neighbourhood schools and we started conversations with them. We had a discussion in KFI where the teachers told us what the children would really like in terms of onsite experiments. RJ Ranjit Daniels (founder-trustee of Care Earth Trust) had an interaction with the teachers on what needs to be done.”

The School is expected to lead the project after the pandemic, when normality has returned.

Jayashree points out that as part of the educative process, a “working manual” of Thalambur lake has been created for the benefit of schoolchildren and other stakeholders.

“We did a comprehensive survey for a period of one and a half years. One wildlife biologist, Vinod Balasubramaniam; and two botanists — Muthu Karthik Nagarajan and Vivekanandan continuously surveyed the place and documented its biodiversity. The hydrology part of it was led by Thirunavukarasu. The GIS work was done by a team comprising Stephen Jayaseelan, Monichandran and Vignesh,” Jayashree explains, adding that extensive tree-planting, which included palm-tree planting on the bunds, was part of a strategy to enhance the lake’s biodiversity without disturbing its essential character.

There were also components that addressed social needs — “community interface” and “local livelihoods”, which were handled by Senthil Kumar.

“We got involved after seeing Care Earth Trust’s work and when they asked us to help in planting the trees,” reveals Naga Srinivas, an executive-committee member of Arihant Heirloom Flat Owners Association and a key member of Thalambur Green Group.

Maintaining the space would involve recurring expenditure, and Arihant Heirloom Flat Owners Association seems inclined to meet that requirement. Naga says the Association sponsored around ₹5,000 for cleaning the bund.

Residents make use of the bund for walking purposes, but their numbers would be much bigger if certain anomalies are dealt with.

One issue is in the face.

Explains Anbu Vahini, another key member of Thalambur Green Group and a resident of Arihant Heirloom. “Right now women have not been able to use the lake bunds for walking due to open defecation. It happens on the side of the bunds. We have been educating the local community about it, telling them not to do it, but it being a practice that is well-entrenched, it is difficult to put a stop to it. We have planned to talk to the police and ask them to come around those hours and tell people not to misuse the space in this manner. We have planned to put up lights on the lake bunds. Solar lighting can be done which is a plan for the future.” Given some people’s tendency to turn a lake with open spaces into an open bar, a source from Hinduja Leyland Finance discloses that a request has been made to the local police to keep an eye on the lake for such activities while their personnel go on their regular patrols.

While such activities inside the lake are certainly unsettling, the most disturbing activity for the residents happens on its periphery.

Dumping of garbage by Thalambur Village Panchayat on a vacant land — accessible via the Thalambur-Karanai Road — within sniffing distance of the lake is a source of unrest for residents. Residents point out that the dumping has been taking place since 2017, and the matter has come up before the Green Tribunal.

“According to Solid Waste Management 2016 rules, a dump yard cannot come up within 200 metres of a lake, but that has clearly been violated in this case. It is found adjacent to the lake. That is the point we have taken to the Green Tribunal,” Naga shares.

“During the rains, the garbage gets washed away into this lake. It is not segregated waste,” says Anbu Vahini. “This situation is of grave concern to us as the Thalambur lake meets the locality’s drinking-water needs.”

According to an earlier report in The Hindu in April this year, the Thalambur Panchayat was considering the option of requesting Greater Chennai Corporation to carry the garbage from Thalambur to its dumping site, as it was unable to locate another space within its limits for dumping garbage. With that, the issue still hangs in the air. Naga discloses that after the local-body elections, the residents’ group is hoping to work with the panchayat’s elected leader and resolve the issue.

Though the lake project is in the can, Hinduja Leyland Finance and Care Earth Trust still seem to be partly attending to the cleaning and security part of it. Anbu Vahini remarks that in the future when the lake would be fully left in the hands of the PWD, the panchayat and the local custodian group, there should be sufficient coordination between these stakeholders to make it a place that residents in and around Thalambur feel safe about and also find clean enough to keep returning to.