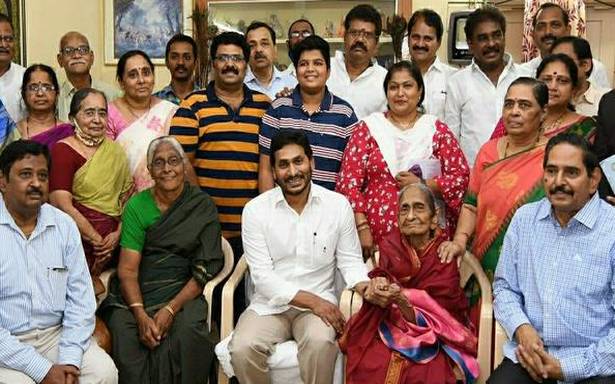 CM visits Seethamahalakshmi and presents her a copy of G.O. sanctioning ₹75 lakh

It was a poignant moment in the life of Ghantasala Seethamahalakshmi, the 99-year-old daughter of the architect of the national flag, Pingali Venkaiah.

The woman, with tears welling up in her eyes, kissed the hands of Chief Minister Y.S. Jagan Mohan Reddy and blessed him as he was leaving after spending close to 30 minutes at her home at Macherla, 150 km from Guntur.

“I was touched by the gesture of the Chief Minister, who came all the way to our home, and I wish he lives a hundred years,” said Ms. Seethamahalakshmi.

In her interaction with the Chief Minister, Ms. Seethamahalakshmi shared the experiences of her father presenting the national flag design to Mahatma Gandhi and introducing her to the Father of the Nation.

More than 20 of her family members gathered at the small house, and they included grandchildren and great grandchildren of Pingali Venkaiah.

Later, the Chief Minister presented her a copy of the G.O. sanctioning ₹75 lakh under the aegis of Cultural Department.

The Chief Minister also launched the celebrations of ‘Azadi ka Amrut Mahostav’ to mark 75 years of Independence with the key theme being ‘Har Ghar Jhanda’.

“The Chief Minister has also invited us to take part in the celebrations marking 100 years of the national flag being handed over to Mahatma Gandhi, to be held at Bapu Museum in Vijayawada on March 31,” said G.V.N. Narasimham, son of Ms. Seethamahalakshmi.

The life and times of Pingali Venkaiah reveal that his works remained largely unrecognised. It is hoped that the Chief Minister’s gesture will rekindle patriotic fervour and help people remember with gratitude the contributions made by the freedom fighters.