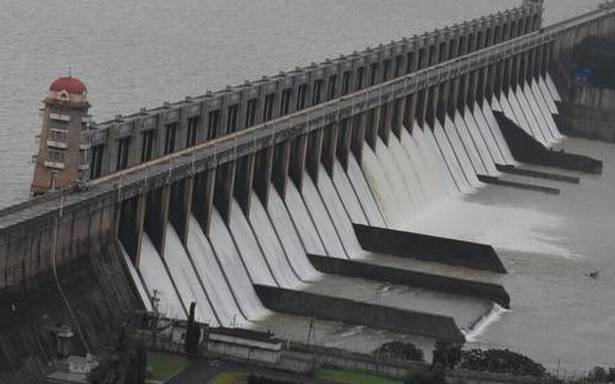 The yield in the reservoir touched 50.46 tmcft on Monday

With the yield in the Tungabhadra reservoir touching 50.46 tmcft on Monday evening, more than the 10-year average of 40.47 tmcft, water was likely to be released to Andhra Pradesh from July 25 through the Right Bank Low-Level Canal and Right Bank High-Level Canal that cater to Kurnool and Anantapur districts.

Andhra Pradesh will receive 52.69 tmcft of water from Tungabhadra dam in the 2021-22 water season. Last year. water was released from August 1, but with good inflows, the Tungabhadra Board that met recently, decided to release for Karnataka from July 18 and for A.P. from July 20, but the officials here were seeking from July 25.

The inflows into Tungabhadra reservoir increased significantly from Saturday with 46,054 cusecs recorded compared to 11,800 cusecs the previous day. On Sunday, the inflows increased to 57,127 cusecs and on Monday it came down slightly to 44,199 cusecs.

While the HLC is likely to receive 2,000 cusecs, the irrigation officials were preparing canals for not getting breach, HLC Superintending Engineer Nayakanti Rajasekhar said. The LLC will take 600 cusecs to begin with, according to the Irrigation Superintendent Engineer, Kurnool.

The Tungabhadra Dam had got filled to its brim on July 19 in 2018 and water was released into the river, but last year by this day the total yield in the reservoir was only 28.55 tmcft and the total yield this year is 52.53 tmcft out of the estimated 160 tmcft for the entire season.