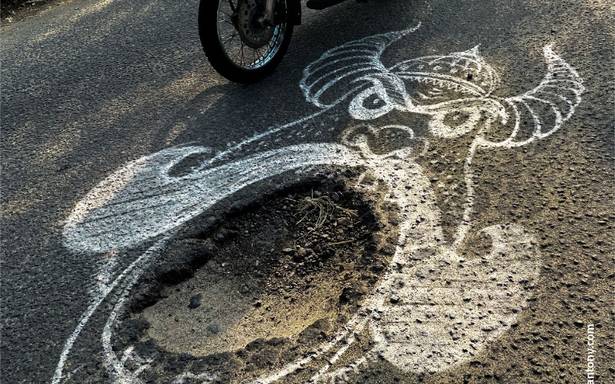 Jaison Antony, an independent creative advertisement consultant from Palarivattom, often roams around the city during early mornings either alone or accompanied by his wife.

Rather than taking in fresh air to get his creative juices flowing, the advertisement professional of nearly three decades standing, keep looking for potholed roads that could be death traps for unsuspecting motorists.

He photographs the more dangerous ones and even takes videos complete with the comments of nearby residents and vendors. He then put the pictures in photoshops and draw an image of Yama, the Lord of Death, around them and post them on his social media handles with the hashtag Kaalankuzhi, which loosely translates as deadly potholes. He had even activated his Facebook page that had been lying dormant for years specifically for running the campaign, which has drawn eyeballs.

“I actually wanted to draw live images around the potholes but dropped the idea since that would have caused roadblocks and invited sanctions from authorities. I have been getting many calls appreciating the campaign and also suggesting roads that could be made part of the campaign,” said an elated Jaison.

There were a couple of incidents that served as a trigger for the campaign. A dangerous pothole right next to the Palarivattom metro station had drawn his attention more than a year back. He wanted to do something about it but couldn’t as his work kept him busy. Then he came to know that it claimed a life after a husband and wife on a two-wheeler was felled by it.

“I felt very bad about it and I was nagged by the guilt feeling that had I acted on my thought I could have saved a life. Then I and my wife ourselves had a fall near Oberon mall after our motorcycle get caught in two successive potholes in a drizzle. I was so infuriated that I blocked the road to fill the potholes with bushes and tree branches,” recollected Jaison.

So, when he left his company and turned into an independent consultant leaving him with some spare time, he chose to act and launched his campaign. He believes that some of the potholed roads that he featured in the campaign including Kathrukkadavu Bridge, Edappally and Cheranalloor were resurfaced as a result.