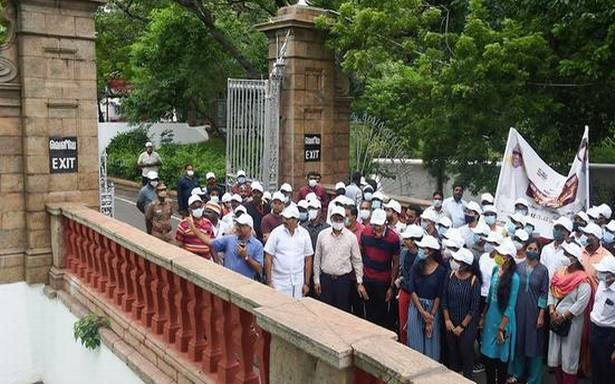 Historian V. Sriram makes it a memorable 3-km heritage walk by narrating events at the T.N. seat of power

Did you know that after the British completed all the security arrangements at Fort St. George in the late 1780s, not a single war happened? Historian V. Sriram, who led a heritage walk for college students, children and adults around Fort St. George on the occasion of World Tourism Day on Sunday, said the security arrangements included five gates, including inner and outside gates, thick walls, a moat and four bastions.

The water gate, the original gate to the port, was sealed during the World War II. It is now inside the moat since the height of the road has gone up.

The Minister and officials took part in the 3-km walk that lasted over two-and-a-half hours.

They got to hear stories, including that of how Arya Bhashyam climbed up the flag pole and hoisted the Congress flag on January 26, 1932 and was later arrested.

Mr. Sriram said the black granite pillars from Pallavaram inside the Fort had initially served as a ceremonial passage way from the port, which the French took away in 1740 and were brought back by the British after they laid siege to Pondicherry.

Although most of the children did not have many questions during the walk, they said they were happy to have heard very interesting.