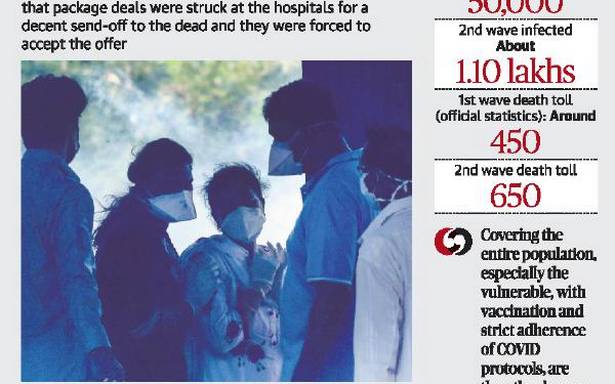 The cemeteries and the burial grounds in the city as well as in the districts would have never seen the piling of bodies, on a daily basis, in the last few decades, as seen in this year. Probably, the last time such a thing would have happened was in 1918, when the district and the then Vizagapatam town was ravaged by the influenza flu or the Spanish Flu.

There were days in the months of April and May, when over 120 bodies wrapped up in plastic sheets were lined up for cremation or burial at the Chavulamadum crematorium, on a single day. And the authorities present at the cemeteries made a killing by demanding rates from ₹ 10,000 to ₹25,000 for a decent last rites, from the devastated family members.

Many who had lost their near and dear ones lamented that package deals were struck at the hospitals for a decent send off to the dead and they had nothing to do but accept their offer.

The second wave of COVID-19, hit the city hard and fast and within a span of two months, the health infrastructure was brought to its knees.

Though the official death count due to the pandemic during the two months is shown around 350, the death certificates issued by the GVMC for the same period was over 5,600.

“We never experienced such a scenario even during the smallpox epidemic. We have not seen the Spanish Flu and there is a very little detail on it. But the second wave of COVID was unprecedented, as we suffered from a plethora of issues,” said senior doctors from the COVID wards of KGH and VIMS.

Though many households lamented of at least one person being infected with the virus and a few were bereaved of their near and dear ones, it was some private hospitals, some medical suppliers and black-marketers, who exploited the situation to the hilt and made a killing.

The billing section in many private hospitals just did bother to share the details of the treatment, but handed over bills that tuned up in lakhs.

The first wave hit the city/district in March 2020. The wave reached its peak some time during July and August and started to taper down from mid of September. The curve flattened by the mid of February 2021 and in the first week of March the number of active cased dropped below 10. The cumulative case load after the first wave was around 50,000. It was the time when the people and the tired and battered medical and emergency staff started to relax, the Delta variant arrived with the second wave and swamped the city/ district with infected persons.

The second wave saw infections go up over 1.10 lakhs within nine months, including about 50,000 coming up in the two months of April and May. The year is coming to a close with total case load tuning up to over 1.60 lakhs (covering both waves).

It was again since September that the curve started to flatten, but still the active cases continue to hover over 100. Meanwhile, the Omicron variant has already arrived, with the first case being detected in the city on Thursday.

“While the first wave was a surprise element for the medical fraternity, the second was a learning experience. We are now prepared for the third wave,” said district COVID Special Officer and Principal of Andhra Medical College P.V. Sudhakar.

According to the medical fraternity, the prime learning aspects were preparedness and teamwork.

“We need to be prepared for multiple waves with hospital beds, oxygen and medicine stock and coordination between various departments such as health, corporation, revenue and police,” said Dr. Sudhakar.

Covering the entire population, especially the vulnerable, with vaccination and strict adherence of COVID protocols, are the other lessons learnt, said Rambabu, VIMS Director.