In a veiled reference to Pakistan, India has told the UN Security Council that the support and safe havens enjoyed by terror groups like the Taliban, the Haqqani Network, LeT and JeM from “beyond Afghanistan’s borders” must be addressed to fight the scourge of terrorism and ensure peace in the war-torn country. 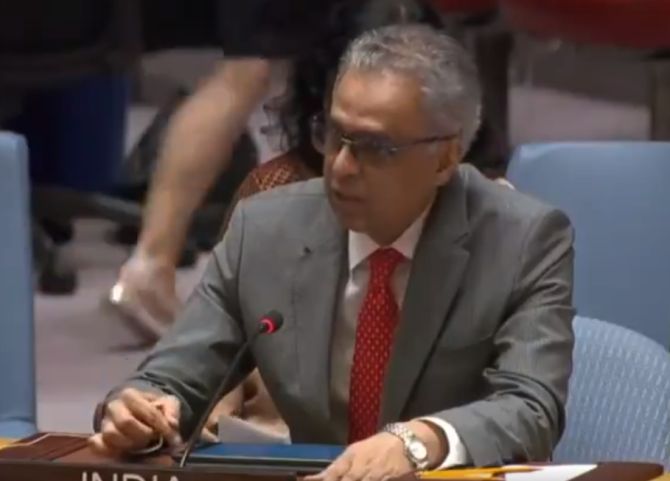 Peace and reconciliation cannot go forward in an atmosphere of terror, India’s Permanent Representative to the UN Ambassador Syed Akbaruddin said in the United Nations on Tuesday.

“There is a surge of violence in Afghanistan in recent days, including threats to the election process itself. This has deepened apprehensions that acts of terror are being used to jockey for a place of advantage in the negotiating process,” he said.

Akbaruddin, speaking at the Security Council quarterly debate on the UN Assistance Mission in Afghanistan (UNAMA), said the international community needs to continue its support by fulfilling the commitments made to the Afghan security forces in their fight against the scourge of terrorism.

“The support and safe havens enjoyed from beyond Afghanistan’s borders by groups such as the Taliban, the Haqqani Network, Da’esh, as well as Al Qaeda and its proscribed affiliates, including the Lashkar e Tayiba and Jaish e Mohammed, must be addressed,” he said, without naming any country.

India has been a victim of terrorism, and it understands and empathises with its Afghan friends the suffering and pain they are undergoing, Akbaruddin said.

The Council was meeting just days after months of direct talks between the Taliban and US government officials were declared “dead” by US President Donald Trump.

Akbaruddin said India supports UN Secretary General Antonio Guterres’s call for direct talks since it is the Afghan people who will implement and bear the consequences of any agreements arrived at.

“Hence, outcomes which have constitutional legitimacy and a political mandate and are arrived at in an inclusive and democratic way alone can ensure stability.”

Afghans are due to head to the polls on September 28, for what will be their fourth presidential election since 2001.

Afghanistan stands at yet another transformational juncture, Akbaruddin said as he noted that preparations are underway for presidential elections in the country, scheduled a few weeks from now.

“Afghanistan is poised to renew its commitment to an order which ensures a democratically elected government is at the heart of any process to determine a peaceful settlement of its issues. A solution which will best suit the country and will be implementable in a sustainable and dignified manner is what we should all join in support of.”

He expressed hope that the international community, through this Council and its various instruments, can finally do right by the people of Afghanistan and support “an inclusive peace” which will ensure that the destiny of the country will be steered by the Afghan people.

However, even amidst the clouds of uncertainty of the present, precious gains have been made by the Afghan people in the last 18 years, the Indian ambassador said.

He said that the Afghan people have strengthened and embraced democracy; established a constitutional order; promoted the welfare and rights of minorities and youth; built a strong and increasingly capable security force; and forged deeper regional links.

“All of this, they have done so, while confronting the most brutal threats posed by terrorism,” he said.

He told the 15-nation UN body that even in the most difficult times, the famed Afghan resilience and strength of character shines through in their homes, schools, colleges, theatres, markets, factories, and indeed on their sports grounds.

“Afghan cricketers recorded, just less than 48 hours ago, their second victory in three cricket Test matches that they have played thus far. Such a feat was last accomplished by any other country way back in the 19th century,” Akbaruddin said, referring to the resounding victory by Afghanistan against Bangladesh by 224 runs in a Test match in Chittagong on Monday.

“This is only one instance, symbolic of the many gains that the Afghan people has made in recent times. Other areas include the remarkable reclamation by Afghanistan’s women of their rightful place in all areas of their society. These hard-won achievements need to be nurtured, not nullified,” he said.

Akbaruddin voiced India’s commitment to support the Afghan people, including through human resource development, support for infrastructure development, trade and investment, as well as enhancing connectivity.

“We believe that there is hope on the horizon. We remain willing to work with all countries in the region and beyond, keeping Afghanistan’s sovereignty and its ownership of the peace process at the forefront.” Why Videocon is staring at liquidation

Arts and science college to come up at Rishivandhiyam, says CM Charlotte Dawson slams trolls who accuse of her drinking alcohol while pregnant
We and our partners use cookies on this site to improve our service, perform analytics, personalize advertising, measure advertising performance, and remember website preferences.Ok